This is going to be a longer post and is a follow-up to my previous posts about abuse in and around Saint Cloud, Florida. I have quite a few things to talk about, just like last time there is list of the portals involved at the end.

Despite Niantic banning at least 4 accounts as a result of my original thread, the St. Cloud folks have managed to continue their abusive strategy of submitting a wayspot in the correct place and then moving it during review. Here are two new examples: 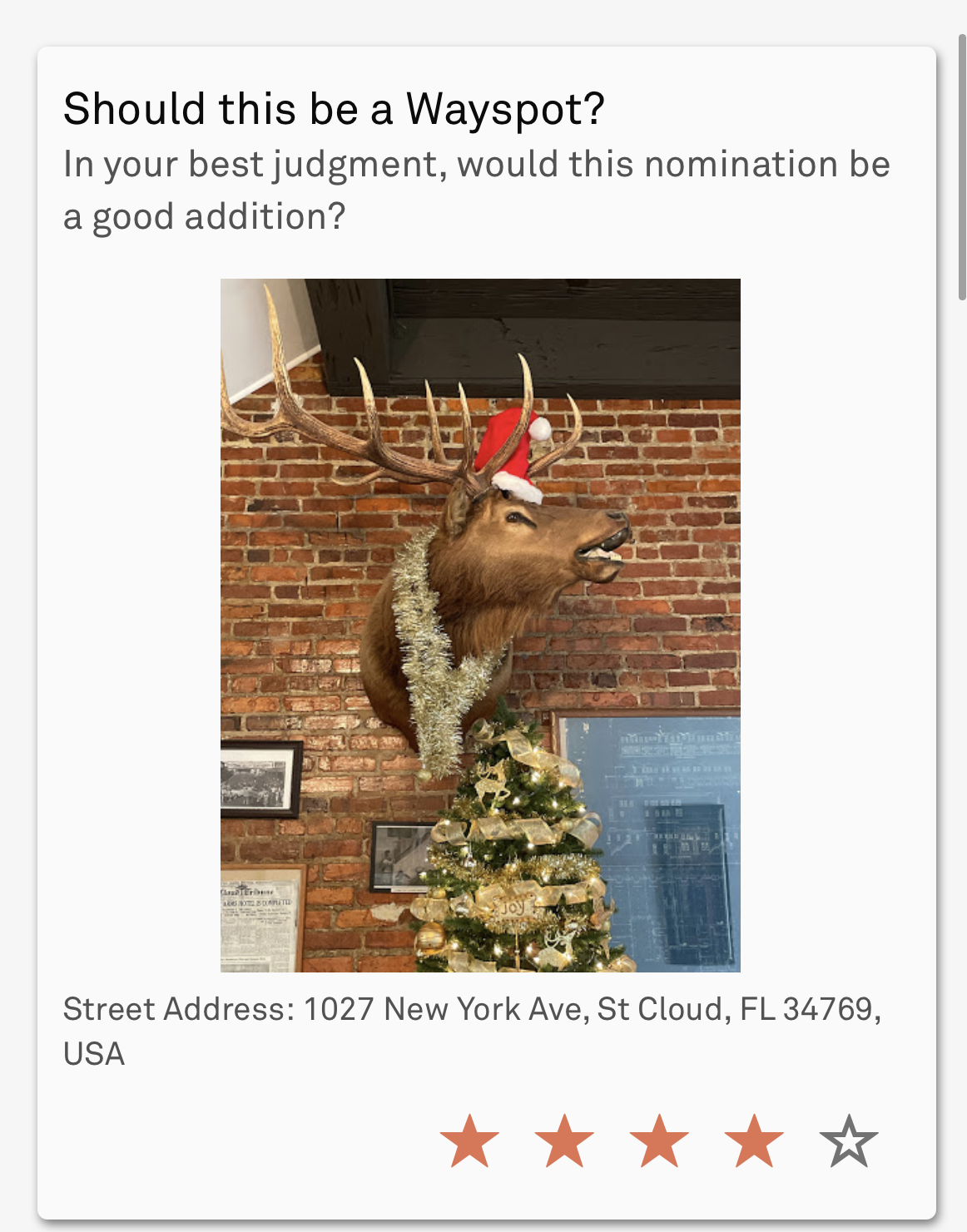 Comparing the address where this submission was reviewed and the location of the portal after it went live, this portal was moved about 1.5 miles from its submitted location and was moved into someone’s private residential property. The portal is one of three portals at this location that this happened with (all on private residential property), and previously, there were multiple other abusive portals at this location that were already removed. 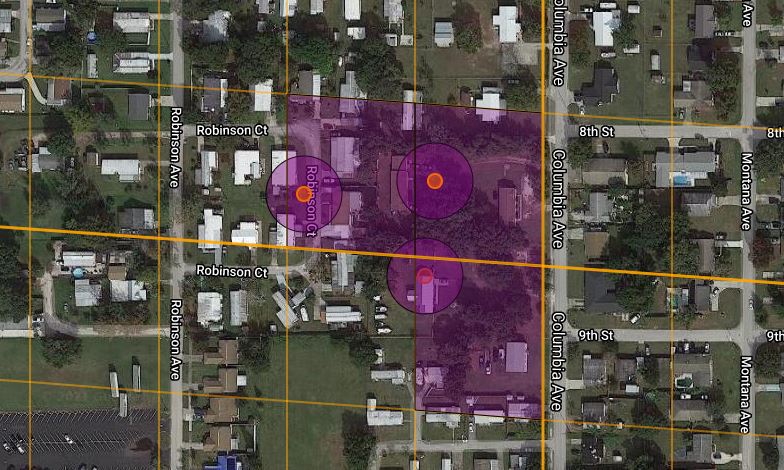 Intel links for these three portals:

This pergola was only moved a small amount in review, however the original submitted location was clearly correct, and this pin was clearly only moved to abuse S2 Cells and Pokestop creation within Pokemon Go. I reviewed this nomination on March 5th, and it was approved a few days later, the abuse at this location is very recent. 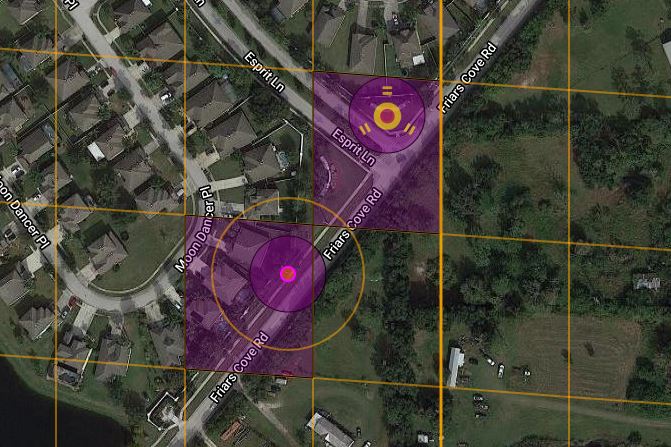 In addition to the continued location abuse, these people have begun to **** me personally by submitting wayspots where the text is targeted at me directly. Some of these examples are below:

A is for accusing:

A is for Allegations:

The targeted harassment in the first two of these is targeting my username, the third one insults me and my actions on this forum (and claims they are trying to redo the abuse), and for context on the last one (HailHypnoTurd), I used to go by the name “Hail Hypnotoad” on Discord, and it is targeted at me specifically as well.

In addition to the submissions of targeted harassment and location abuse, we have also seen some new deliberately fake and ineligible PRP submissions coming out of St. Cloud, and at least one of them is attempting to replace a wayspot that was removed for abuse. Two examples of these submissions are below:

The tree of pokemon:

The second example (The tree of pokemon) is the one we found that is definitely attempting to replace a faked wayspot at the same location this was submitted. That wayspot was named “Pavilion Information Board” and was either deleted or moved to its proper location already by Niantic.

In the comments of my original thread I noted that as a result of Niantic moving abusively created wayspots back to their correct/submitted locations Niantic was inadvertently creating a large amount of portal stacks. It turns out however, that the stacks aren’t just portals, the stacks are Pokestops as well and for whatever reason they do not abide by "S2 Cell" rules. Here is an example below: 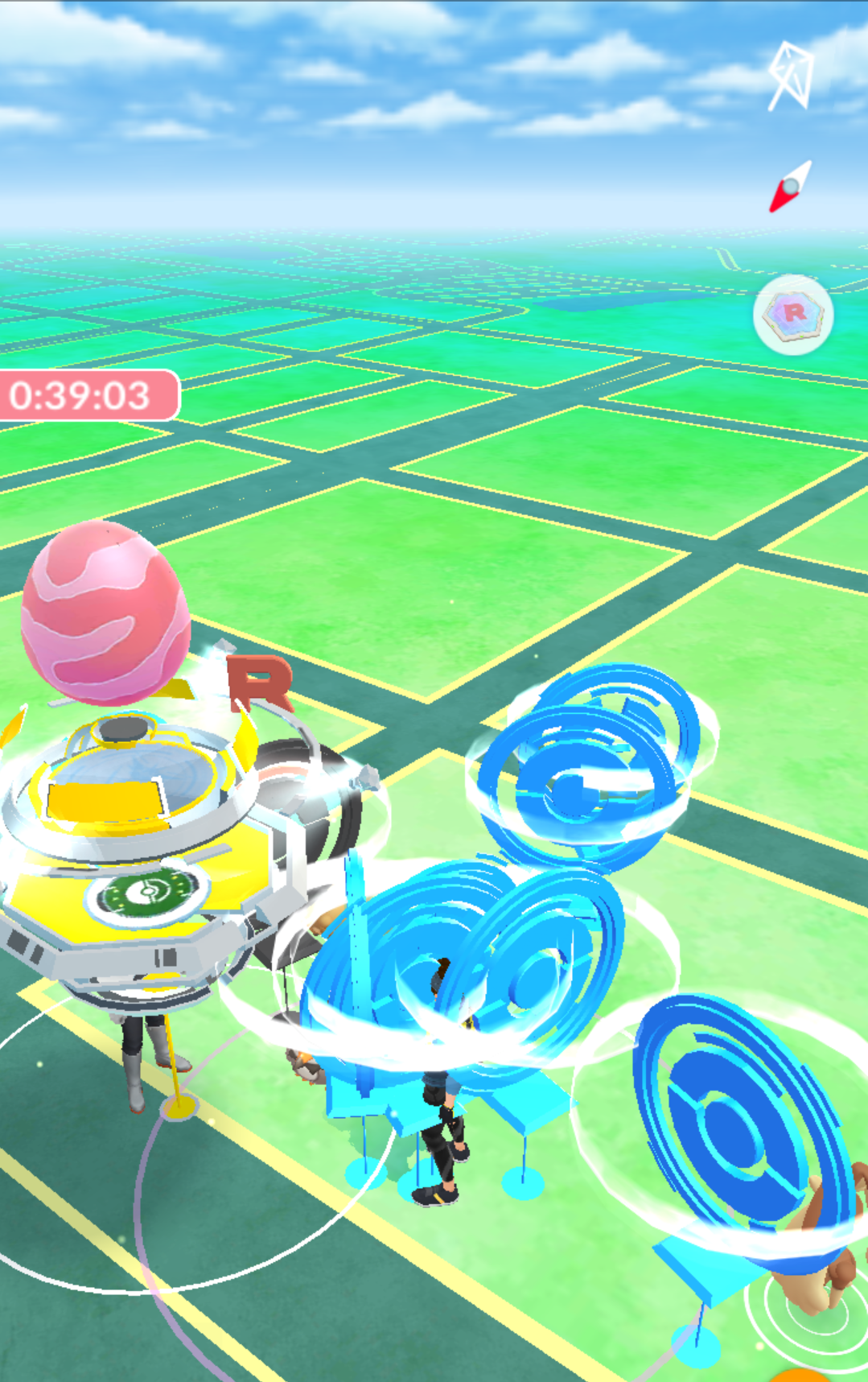 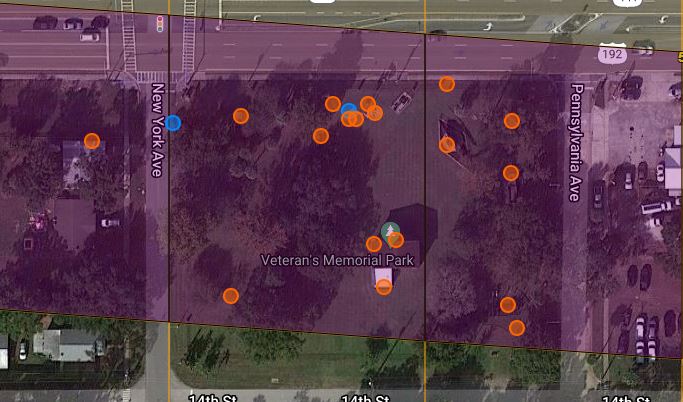 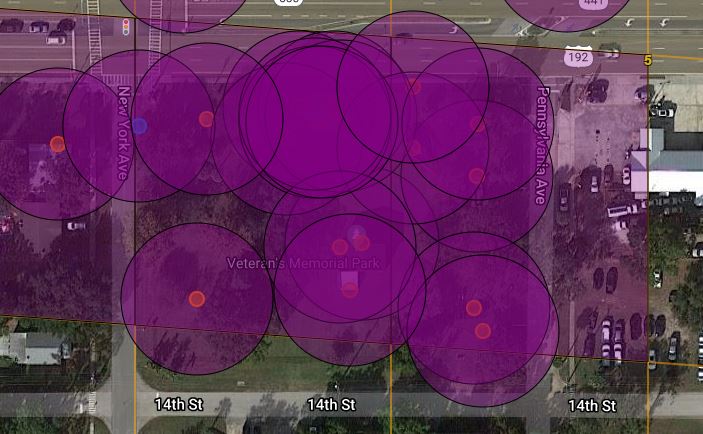 Most of these wayspots never should have been created due to their close proximity to other portals, however despite being abusively created, these portals also no longer follow the S2 cell rules that they should. The abuse that was “rectified” by moving these wrongly spread out Pokestops back to their correct location has only rewarded the abusers with a stack of 10 Pokestops on top of each other, and numerous other smaller stacks around town. That doesn’t seem like a proper resolution or punishment to me, that seems like a reward - an unfair reward that is absolutely impossible for any legitimate wayfarer to obtain.

There are a number of unresolved issues that I talked about before that also need to be readdressed:

Late in the comments of my first thread it was discovered that one of the earliest forms of abuse that this group participated in was using small temporary statues to create faked wayspots around their town. This was discovered because a Facebook post was found where a member of the abuse ring shared a fake wayspot that was created this way, as well as asking if there were any people who would donate statues to the cause. That post, and a link to the wayspot are below. 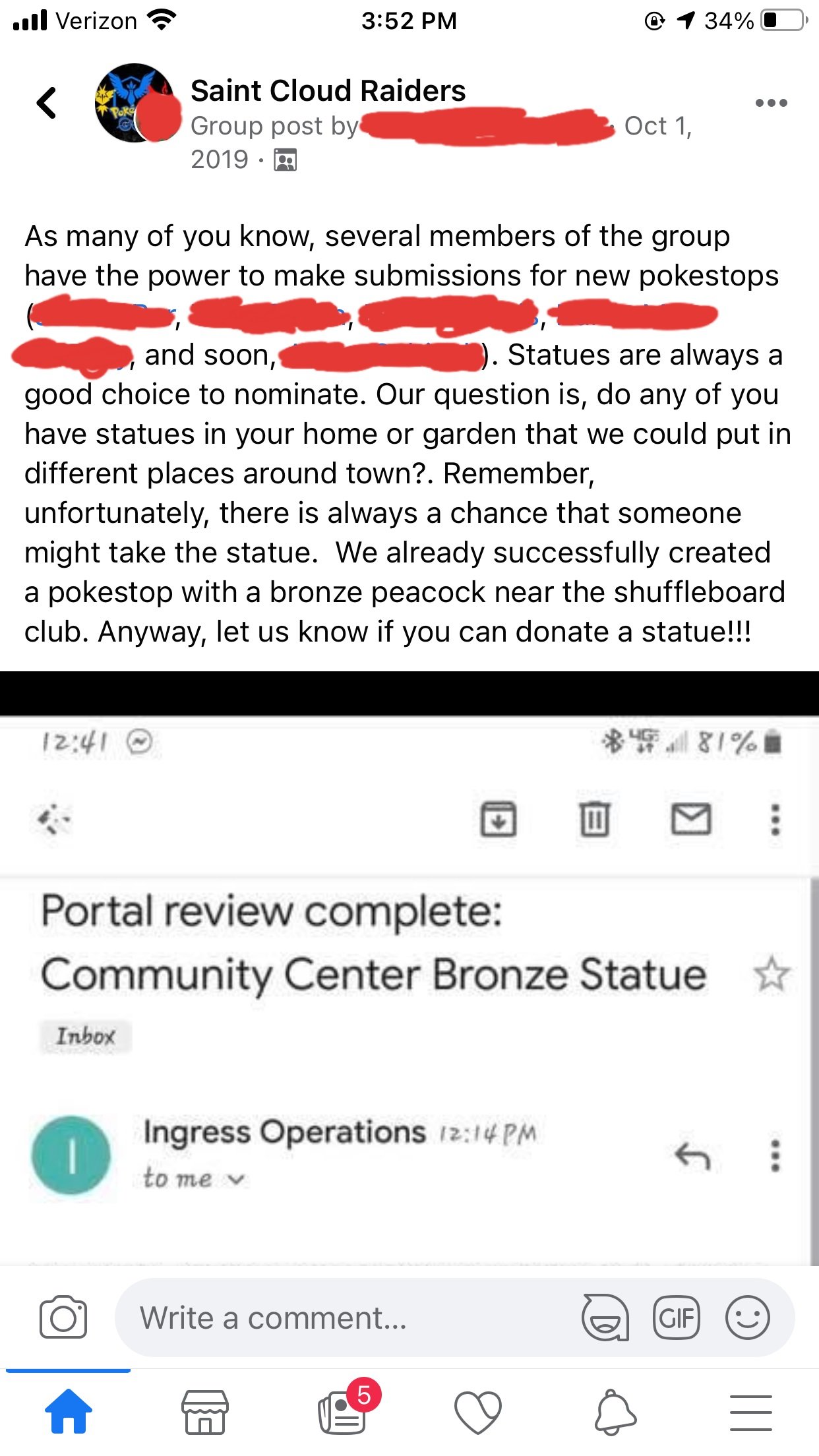 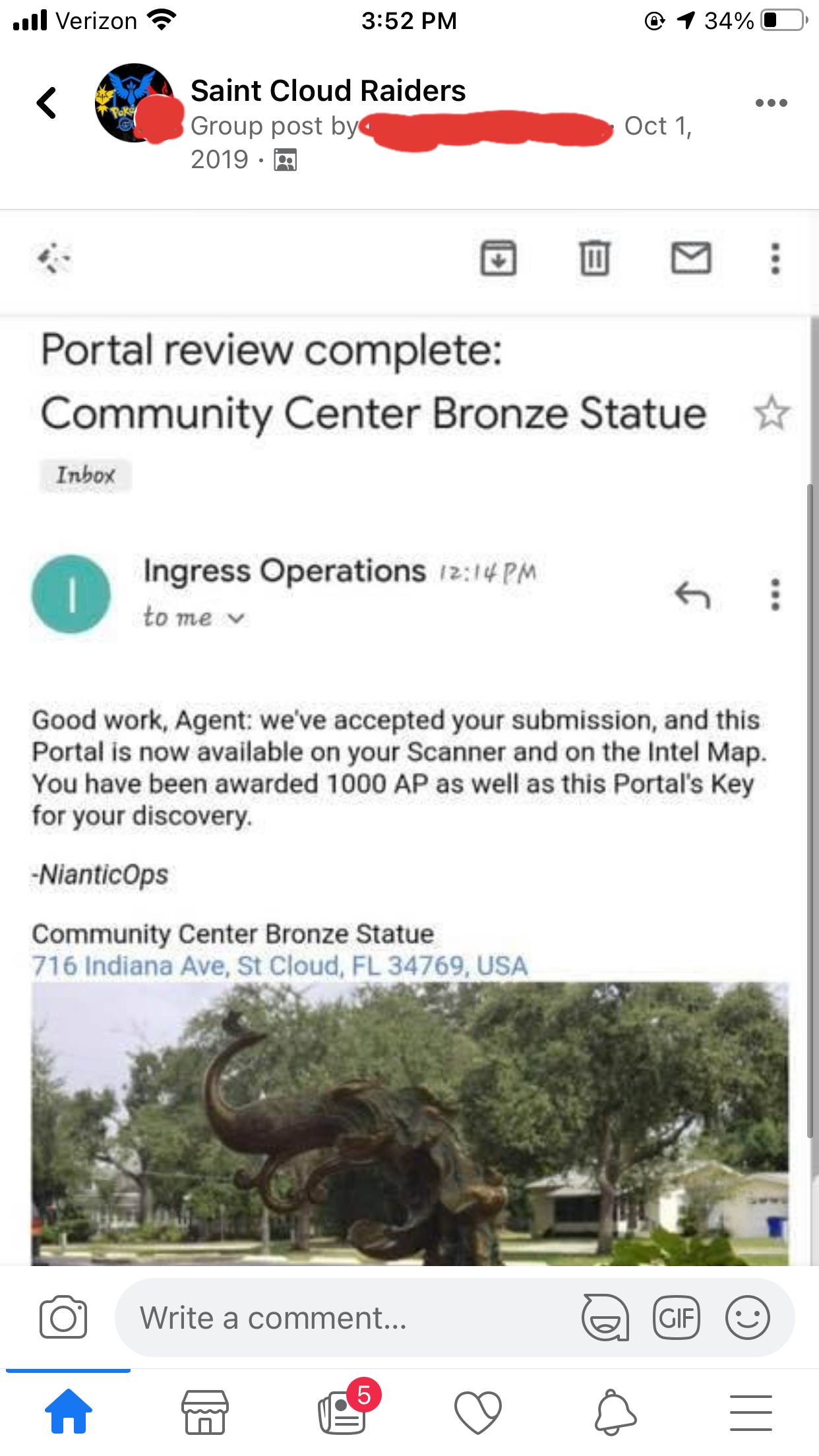 Not only does the wayspot in question still exist, but so do other wayspots that were created similarly. It is also worth noting that other abusive statue wayspots we found were completely surrounded by other fakes that were now moved or deleted by Niantic - Clearly these people were trying to fill this area with fake wayspots before they changed their strategy to abusing wayspot locations.

Other "statue" fakes we found:

In my original thread, a user came in claiming they they would use their multiple accounts to continue this abuse and they would be rejecting my submissions and any submissions from my home city. After it was clarified that four accounts were banned, Casey said that they "reopened this investigation to determine whether these accounts are connected to other active Wayfarer accounts."

This doesn't seem to have been followed up with, as clearly abuse from additional accounts is continuing to occur.

Furthermore, given the fact that these people are clearly continuing to review abusively, it gives credence to the open threats that were made on this forum that these people would be targeting and review-bombing my submissions and other submissions from my area. What is being done to prevent this?

Also worth noting, many of the abusively created Wayspots that I reported in my first update post about Metrowest have not been addressed by Niantic. On the day I posted that update, Niantic began going down the list I provided and addressed a decent amount of the wayspots, but clearly stopped halfway and never finished addressing the issue.

There are also a number of unaddressed fake wayspots still existing within the area of St. Cloud. As a result I have compiled a new list of wayspots that needs to be addressed, including most of what I have talked about already in this thread. Some of these are definitely newly submitted, some of these were just recently discovered, and a few of these are appeals of wayspots that were not removed the first time around, now with more detail/information. The list also includes the unresolved wayspots from my last update about MetroWest. Note, this list does not include wayspots related to the portal stacking issue.

This will probably be my last update on St. Cloud, unless things take a horrible turn somewhere in getting these issues resolved. I may take a little bit of time to make another post to share what I’ve learned from the situation and what both the community and Niantic can do to identify, stop, and prevent abuse. Thank you to everyone who has helped me in the process of identifying this issue and working on resolving it, including Niantic, even though the process has been a little rocky.

Reminder, if you are going to comment on this thread, please stay constructive, It will only hurt the situation if the thread gets closed.