A cooldown has been activated?

I just received my first cooldown after making fewer than ten reviews. Is it because I was reviewing too quickly or that I made too many rejections in a row? I had many 1 star nominations and chose a different rejection reason where possible. Am I supposed to lie to vary my answers more to avoid getting another cooldown? When there was a good 5 star nomination I gave it 5 stars all round. I'm bored and and nothing else productive to do during lockdown in France, while also being physically injured, so I am a bit annoyed. 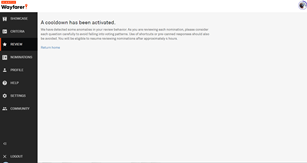