Since the last big Wayfarer-Update, there has been one german translation causing some issues. It was once reported when it was new, acknowledged, but never fixed, so I am reporting it once more.

The problem is this: 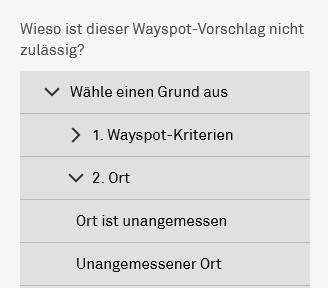 This basically means the same thing.

"Location is inappropiate" vs "Inappropiate location", but they actually do different things. They should be renamed to avoid confusion and wrong rejection reasons. The word "unangemessen" itself is a poor choice, since some germans can easily misunderstand it with "unpassend" (meaning: "unfitting"). This is why many germans get their nomations rejected with "Cemetery" or "Explicit location" (adult entertainment) when they actually should be rejected for "Other rejection criteria". Not only produces this false rejection reasons in germany, it affects the countries around germany too, if a nomination is upgraded (let's say in Czechia or Netherlands) and german voters reject it for the wrong reason. Examples for this actually affecting the quality of the reviews are: a czech boat rental being rejected for being a private tombstone, or a german post office being rejected for having adult entertainment, like, really? It's obvious that this false translation took their part on this. We haven't had such strongly false rejection reasons since before that particular update. (Here is another person making this point: https://community.wayfarer.nianticlabs.com/discussion/comment/102116#Comment_102116 )

Now, I know which one is which by setting it to english, but new german reviewers won't know this, and think either is fine for something that doesn't meet the criteria. Which results in the confusion I stated above.

The way to fix this is get rid of the word "unangemessen" and make the differences between those two clear. So I hereby ask to change this translation. I have a solution which sounds best too.

Change the first option to: "Anstößiger Ort", which will tell german reviewers very clearly that they're rejecting it for it being a explicit location, something that would have adult entertainment.

Change the second option to: "Sensibler Ort", that will also make it obvious to german readers that stuff like private tombstones are too sensitive to be included in the game.

A lot of people in the german community can provide other examples if needed (basically stuff that didn't meet the approval criterias being rejected for either adult entertainment or private tombstones over and over in many cases while the nearest nightclub or cemetary is miles away, or even non-existent)

These two changes would greatly increase the experience for both, german (and nearby countries) submitters and reviewers, removing a lot of confusion and false reasons.