I have been given a blessing to write up a third post, as a continuation of the closed Nomination and Edit Abuse in Sydney CBD From Other Countries post. But I'll make this simple, straight to the point, and not full of large-sized screenshots. For those following, here's part 1 and here's part 2.

In my last post, I posted a review of a "mega charizad". There are far less instances of nominations than there were a couple of months ago but that is due to the reviewing queues and backlogs speeding through across the region, so it was likely that they were all clogged up near each other and dropped into voting one by one. This is not that bad, because they are rejected very quickly and will disappear within a day or two.

This is the main issue here. More often than not, people will post anything from Pokemon GO AR screenshots or random images from their gallery. One concerning trend is that literally half of them will have a Pokeball with a Star as an icon. It is spoofing software.

But what makes edits and photos worse is the fact that they're extremely sticky. As in, they will linger on between reviews for days or weeks at a time. Because many are having new options or edits put on them regularly, they come back with more and more options and they just stay forever. And you get tired of seeing the same photo over and over again, and then they've added yet another screenshot of the same thing, and then maybe they'll include a completely black screen, and then they're dumb enough to add their face in.

Below are a whole list of things they do. They will:

And many examples are as follows: 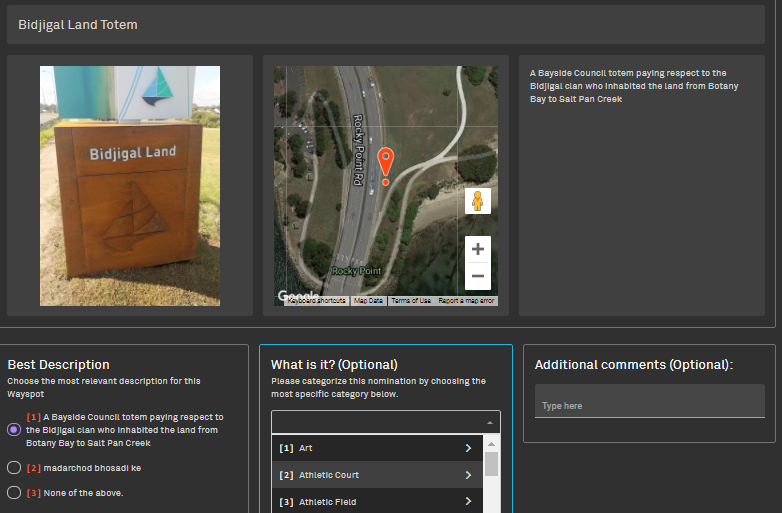 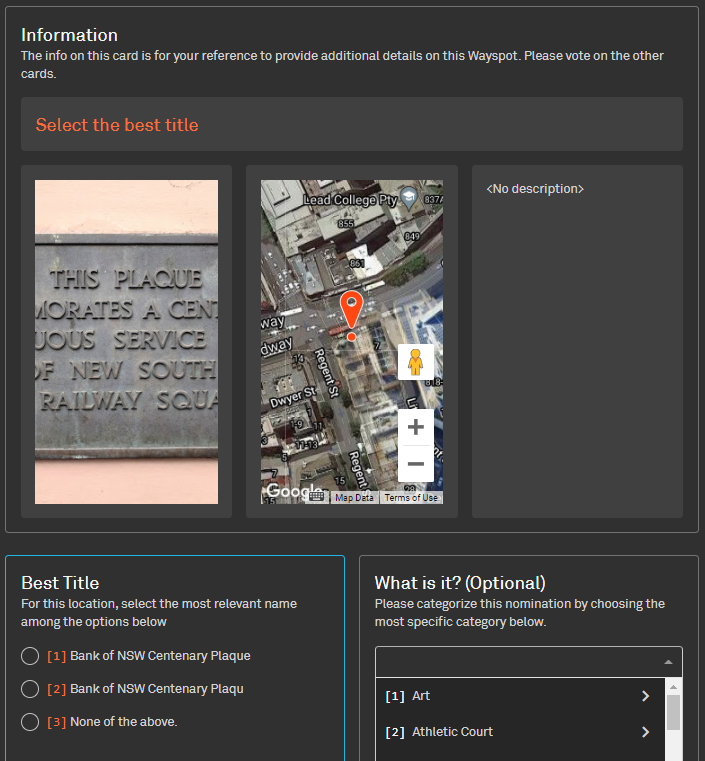 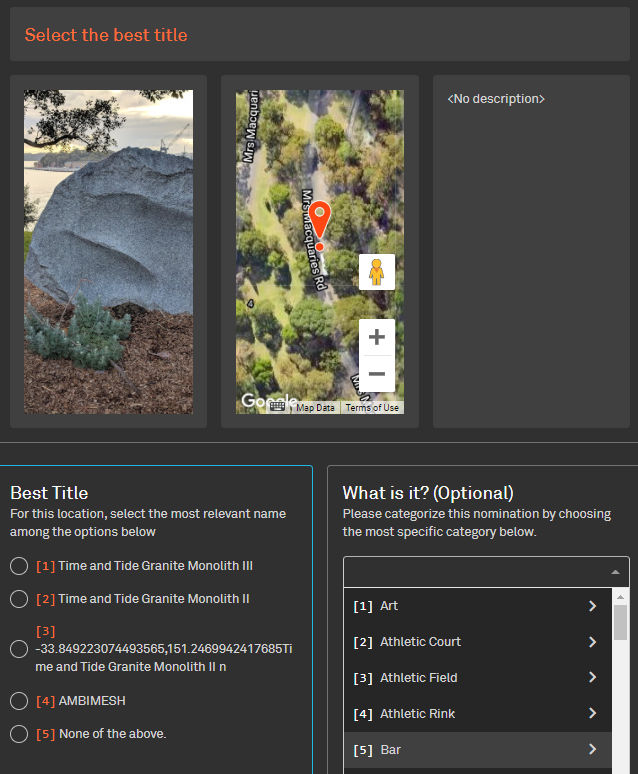 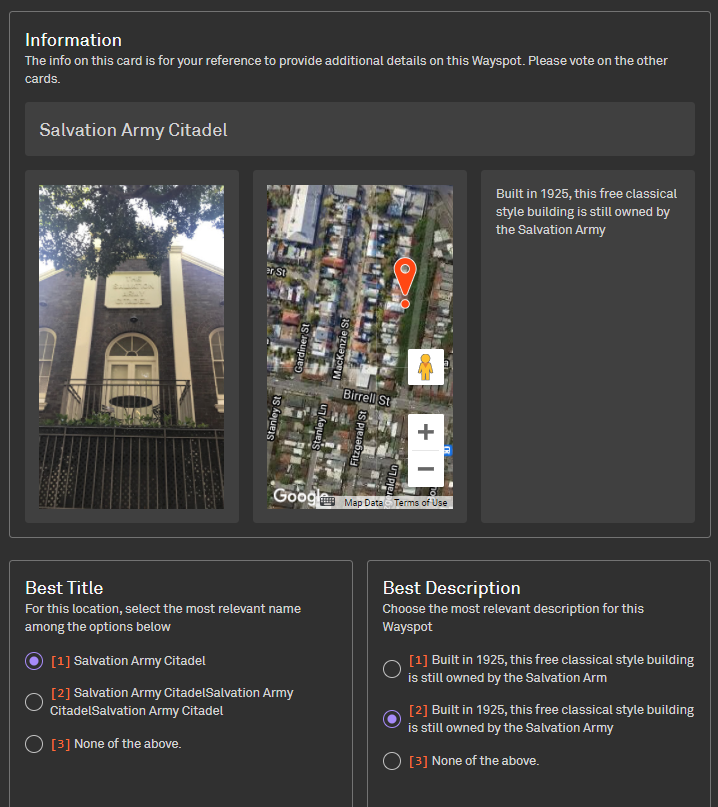 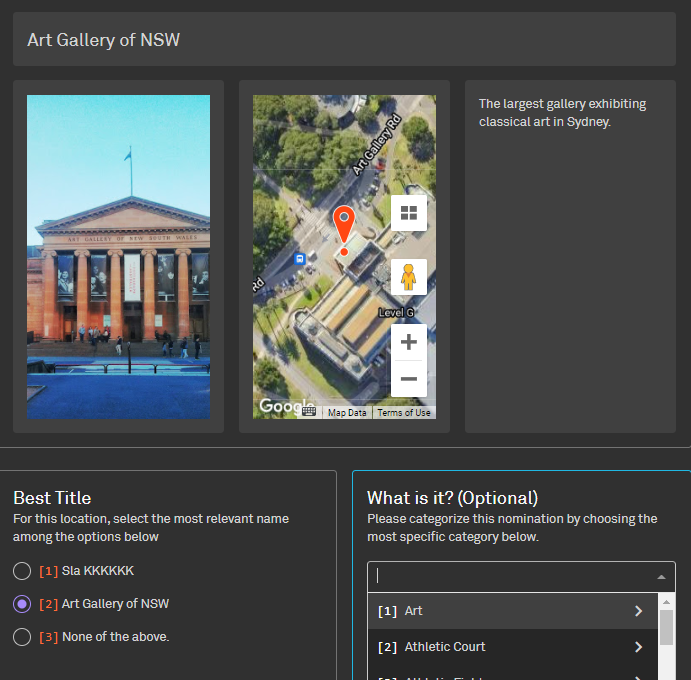 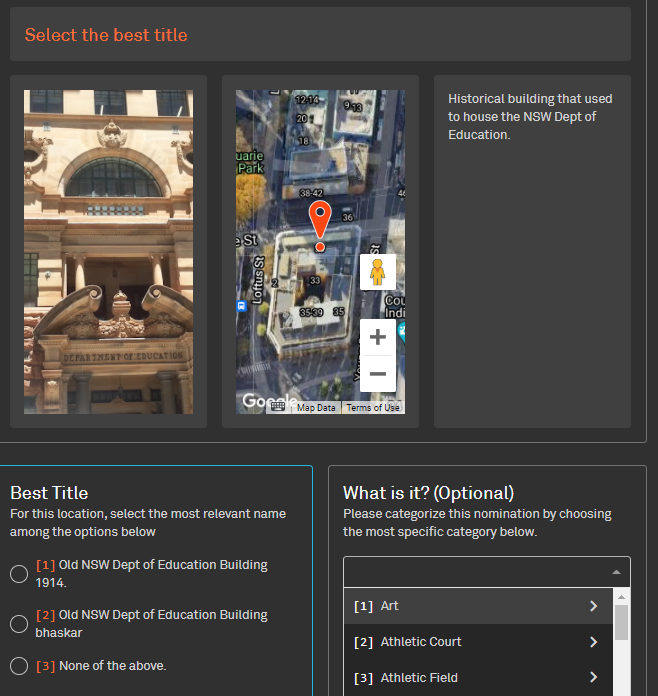 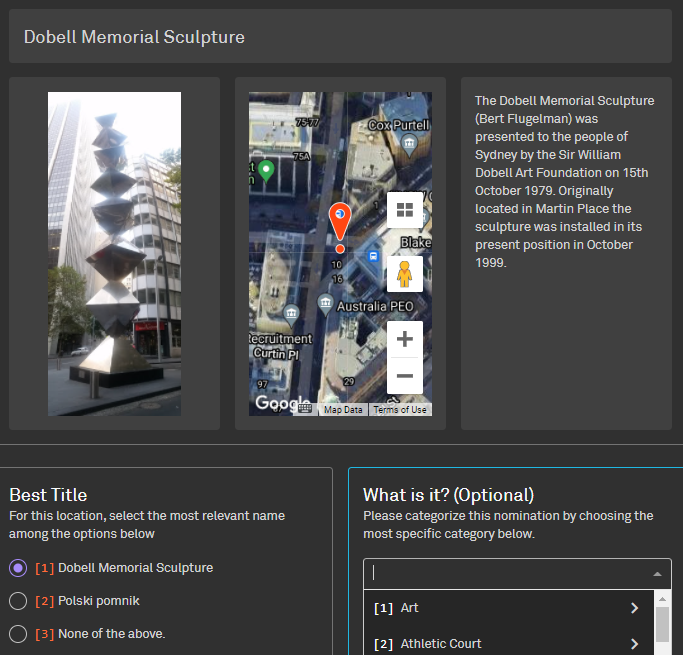 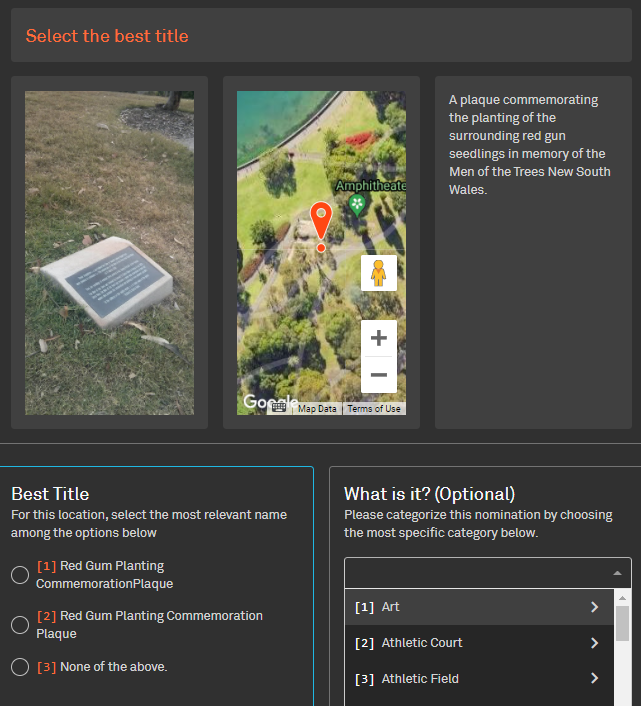 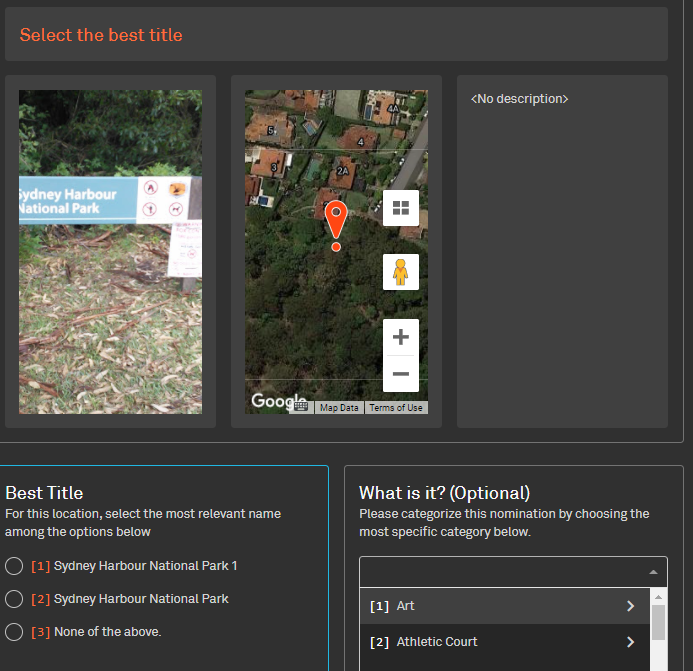 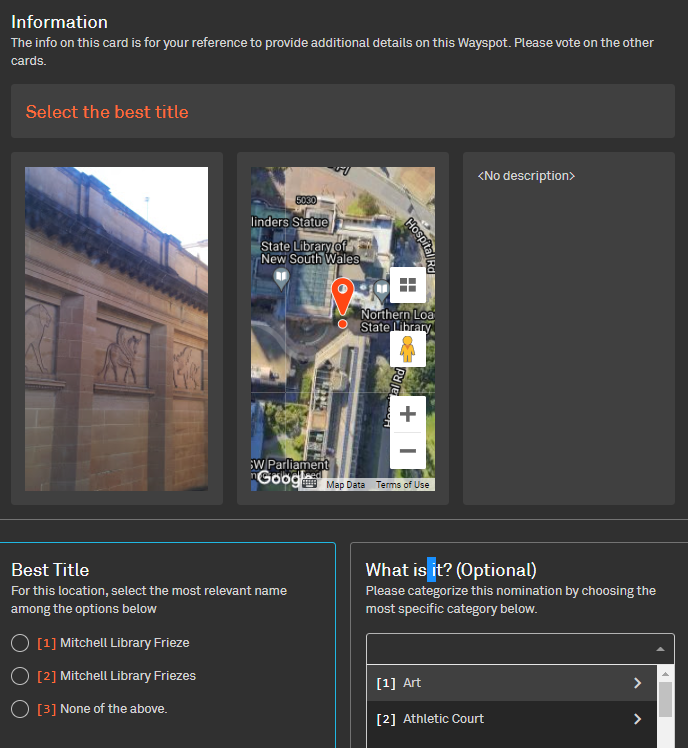 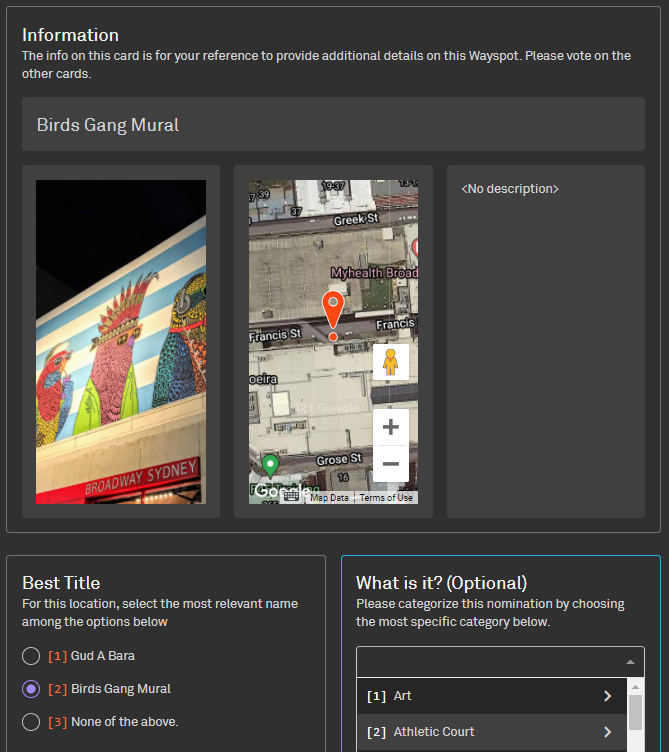 With every abusive edit, there's a photo edit, and vice-versa.

Photo and edit reviews go into voting often at the same time. However, at times they are not concurrent. The obvious trend is, if there is an abusive edit to the title/description or location, then there is highly like an abusive photo, and vice-versa. So all reviewers over a wide area (including the ACT) are going to be reviewing these as well. Below are eight different pairs of photo edits and title/description degradations. So when you are considering taking action on an abusive edit, also check if that wayspot has the other kind of edit included and vice-versa. 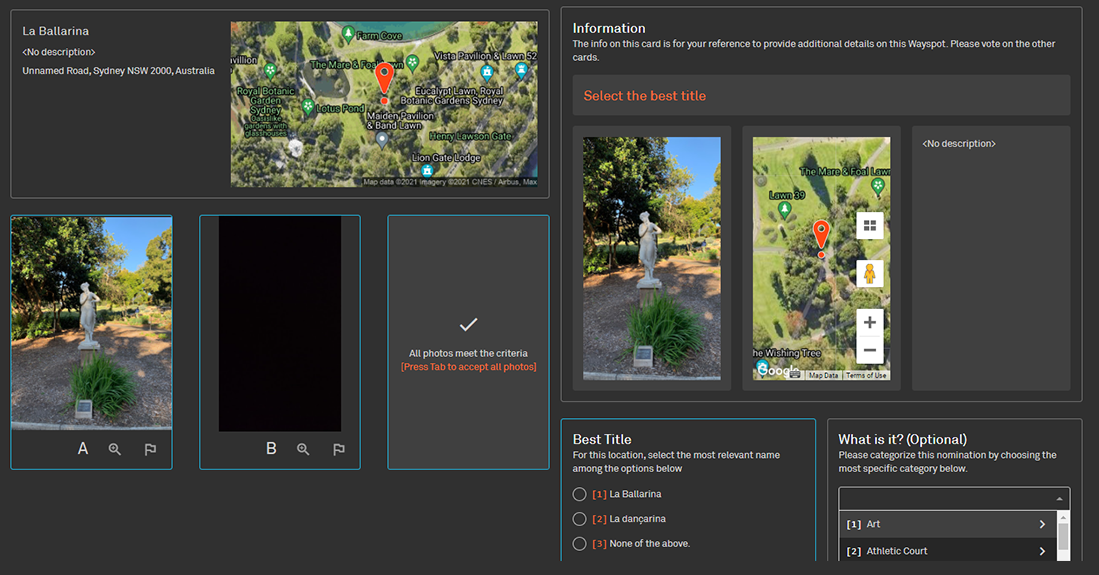 Note: The child below looks like they're 10 years old, yes at times it's often CHILDREN who are the ones spoofing and degrading wayspots all across Sydney. 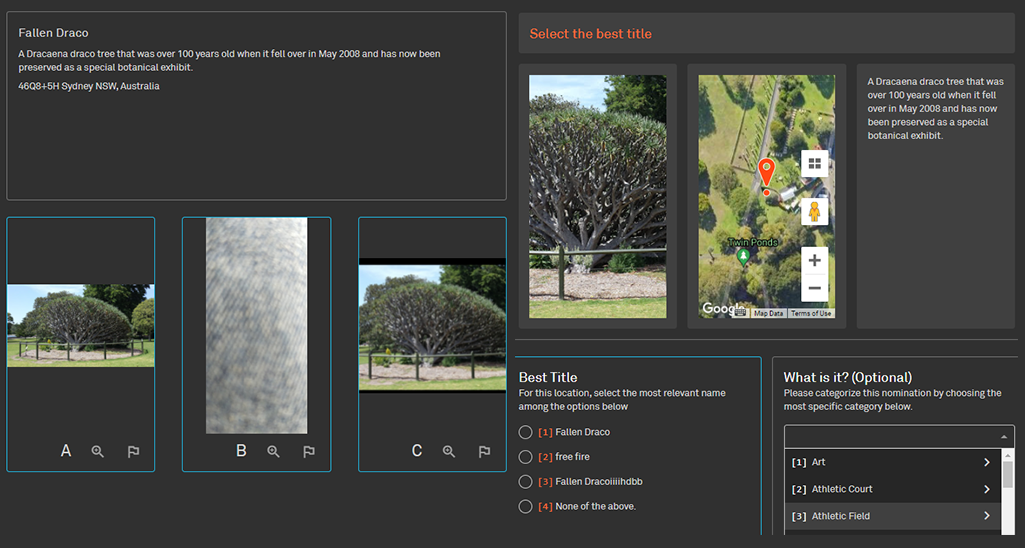 Screenshots of Existing Photos are Being Added

The example of Phillip's Foundations above shows an example of the existing photo being screenshotted twice and submitted to the wayspot as additional photos. In the middle one, there is a thick black line at the bottom, but the one on the right has a highly obvious black space. Annoyingly enough, the middle one was approved. Similar, Wharf 3 (Manly Wharf at Circular Quay) also had an additional photo approved.

What's the problem here? They are MY photos. The photo added onto the wayspot is the abuser screenshotting, cropping and then adding it back in. It is highly degraded in quality as there is pixelation, there is often black borders or spaces on the photo, or they are further zoomed in. Unfortunately, the regular reviewer won't pick up these things and will just accept photos that look the same, so it gets added and it goes live. I urge you to remove such instances of these photos being uploaded! Here are two examples of the same photos being submitted as additional photos, except with a slight modification, can you figure out which one is the real one?: 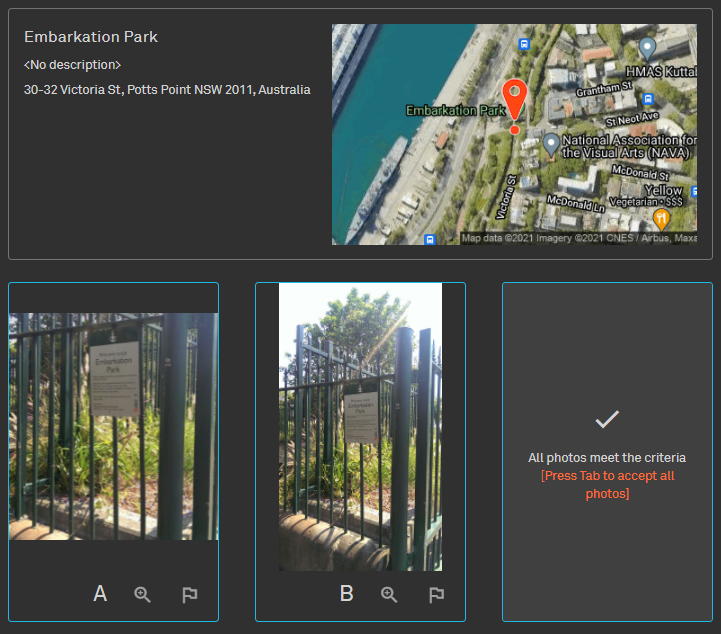 So what can we do?

It is not enough to just for these to be reported on so that action can be taken, these people need to be prevented from doing so in the first place. And the only requirement for someone to contribute this abuse is for Pokemon GO players to reach Level 38, that's it.

You need to gate these functions. In the Wayfarer 4.2 New User Orientation, you stated that the in-game contribution features would be gated by level and user orientation status. This is sorely needed as soon as possible. Spoofers and such abusers have no reason to upload photos of their families, faces, screenshots or Pokemon GO images. They will not care about whether something has pedestrian access or whether a playground at a school is eligible. Given the fact that these edit/photo abusers are often children or illiterate, they will not have the capacity to pass the Wayfarer test to access such contribution features. That's not their goal. Their sole goal is to just pollute and tag existing Pokestops with their names or add photos to them for some odd desire of attribution, and that is simply made far too easy just by being a high enough level to do so.

Same things with photos. How is it so simple to just submit a screenshot of their phone into a wayspot? Or a Pokemon AR photo? It is far too simple. And simply put, the flag function in the photo reviews does diddly squat. If something has been flagged a couple of times already, it must disappear from the queue. There's a reason why something is being flagged, and it doesn't take the standard amount of reviewers to continuously reject such photos. Once flagged, for whatever reason, put them aside from the main queues so everyone else doesn't have to action this. Sure, maybe some people could have advanced flagging capabilities or forcibly remove something from the queue, but right now, the flag does nothing.

All I want is for this to end.

Spoofers get a free pass and reign on everything. It's just frustrating seeing screenshots, pokemon, faces of children, and edits done by kids from elementary school. Clearly some people should not have edit privileges whatsoever. When every third or so review is one of these abusive edits or braindead photo reviews, who would want to review anyway? Anyone from Sydney can attest to that, even from the ACT because they will often just see these photo edits anyway.

I really cannot wait for January for the New User Orientation to begin and for the in-game contribution features to roll out by then. It is too late. Only then when those who have passed the Wayfarer test (or some auxilary test guiding people on what sort of photos or edits people should submit to wayspots) then would be able to suggest edits or add photos. It is extreme, but it is well and truly needed. Only when people are onboarded are when they would have access to the in-game contributions and edit/photo management, then you may allow it. Or even bolster your capabilities to dealing with abuse, like that new abuse reporting system we were told was coming. But right now, it is a cesspool I want to be well away from.

Every second, every minute, every hour, every day.