The question of clarification of this criterion seems to have been left behind by the wayfarer team during the Christmas holidays, so I will rewrite the text and ask the question.

I was reviewing wayspot nominations the other day and found a nomination that I was unsure about reviewing.

I have seen similar nominations in the past, and I would like to confirm what criteria I should use to make a decision.

I thought it would be difficult to understand just by explaining it in words, so I made a conceptual diagram.

First, take a look at Figure 1. This time, I used Pokémon. But this is a concept. Think of it as the exact same object.

The only difference here is the location where they are placed.

In other words, there are several identical objects placed.

Suppose there are several candidates along the path.

If there is no sole one, it is a quality nomination that should be approved.

If you check along this road, you will see that there is a different candidate every 50 meters, some of which have already been approved as wayspots.

And if you look closely, you can see that they are regularly aligned.

Let's say that these exact same objects are 250m apart from each other.

In this case, how should we make a decision?

(1) They should be judged separately as different spots even if they have the same design.

(2) Even if they are some distance apart, they will be judged as duplicates.

(3) Rejected as a mass-produced product.

Think of it as a diagram of a city. 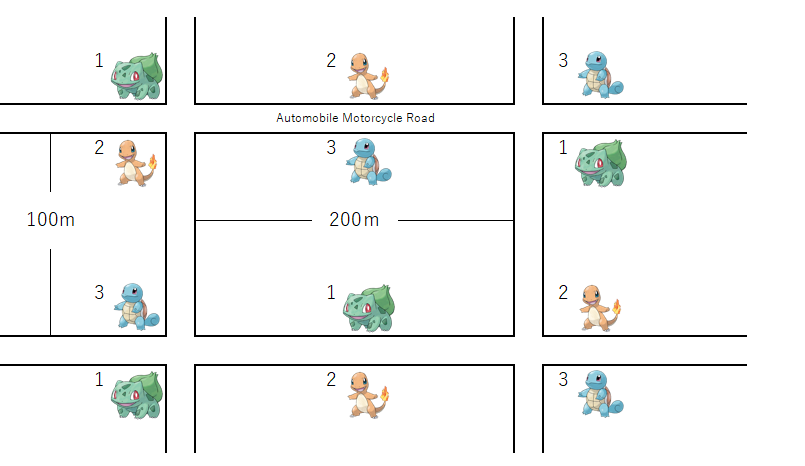 Suppose there are several candidates and existing way spots with the same pattern, but in different locations, in the middle of an intersection or street in the city.

This is another candidate for quality that will be approved if there are no more identical ones.

In this case, what decision should be made?

(1) Examine each spot separately as different spots even if they have the same design.

(2) Examine them as duplicates even if they are some distance apart.

(3) Rejected as a mass-produced product.

In my opinion, it should be judged as (2) or (3), and even if existing waypoints are not deleted, many of them should be considered duplicates, but please let us know your opinion.