I'm asking because I've been in a discussion where my "opponents" think I have entirely the wrong idea. Maybe I do.

I've generally given low scores to "trailmarkers" in cities that denote, say, the way on foot to certain locations. These are typically metal signs (though usually different from generic road signs, mind you), and it is unclear to me whether you're supposed to follow an actual path or whether it's simply sidewalks. Because I don't necessarily view them as "trails", and because of my interpretation of the spirit behind the trailmarker rule - I think they are allowed so that there can be more wayspots in forests, on mountains and so on, because Niantic wants people to exercise through their games. I think these city trail marks accomplish this in a much smaller degree. The reasons for accepting trailmarks as wayspots are "adventuruous locations" and "promoting physical activity", which I think apply to a much lesser degree here, since no physical activity is necessarily required to reach the wayspot, and the actual location of the wayspot itself is almost assuredly not adventuruous (even if the destination being pointed to might be).

However, I am criticized for judging wayspots based on their location, which is apparently something Niantic has stated that we are not to do. While I clearly have an opinion on the matter, if I'm wrong, I want to know.

This is the example trailmarker that was put forth in the discussion, which I said I would give a low score to: 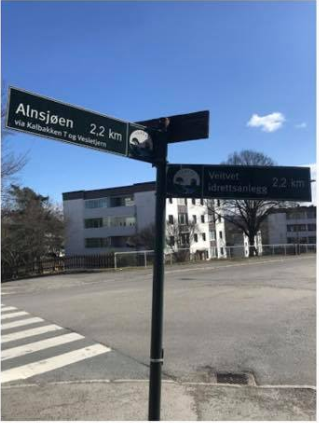