The "mass-produced manhole covers" in Japan - Wayspot and Wayfarer!

As you may know, Japan is currently one of the most overcrowded Wayspot areas in the world.

If the applicant complies with the "Wayspot Eligibility",the ones that would normally be rejected as a matter of course are ONLINE as Wayspots now (probably hundreds more).

There are mixed in with the overcrowded.

It is a manhole cover.

(There is also an example of a manhole cover that exists as a Wayspot as a "manhole".)

A mass-produced manhole cover made by pouring molten metal into a mould.

For some reason, the mass-produced manhole covers, which can be replaced at any time, exist in Japan as an incredibly large number of wayspots.

The "Manhole Cover Wayspot" has been submitted continuously since the Seer days. And unbelievably, it's now ONLINE.

And these manhole covers are still being applied for on Wayfarer!,everyday.

I reject mass-produced manhole covers. However, if you look at IntelMap, you will see that manhole covers exist ONLINE as Wayspots.

I believe that manhole covers should have been rejected in the first place.

Sadly, in Japan, there is a wayspot of manhole covers blocking sewers and culverts.

And there are too many of them to count.

Wayspots exist not only in big cities like Tokyo and Kyoto, but also in regional cities and rural areas, and surprisingly, all over Japan.

It's amazing how many "manhole cover Wayspots" there are in Japan.

Here are just a few of the many examples. 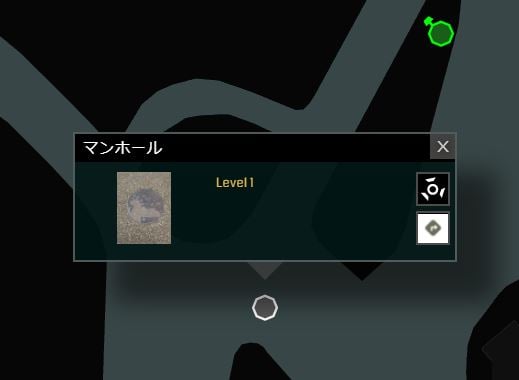 For your reference, here are two blogs that cover manhole covers in Tokyo. 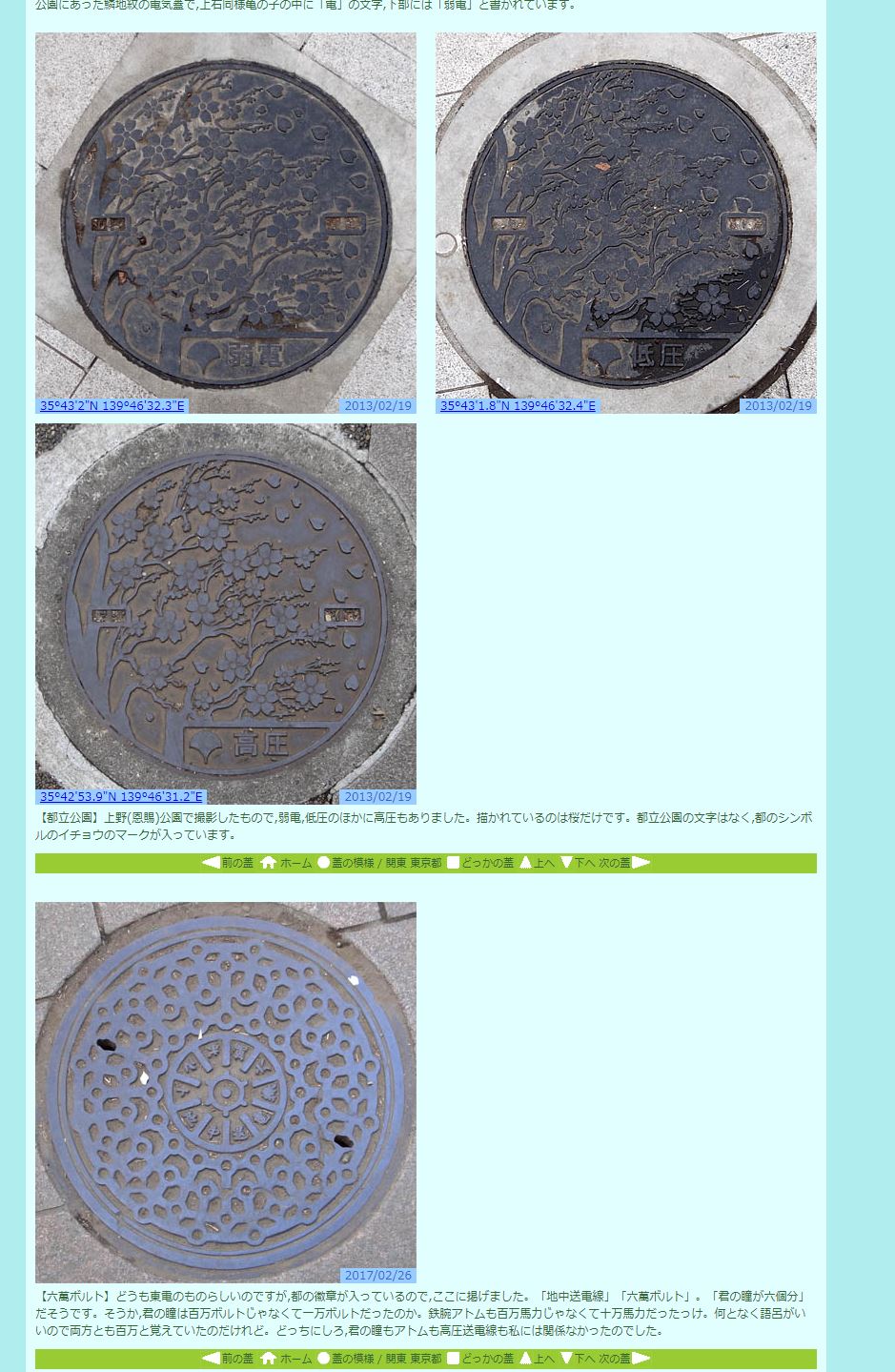 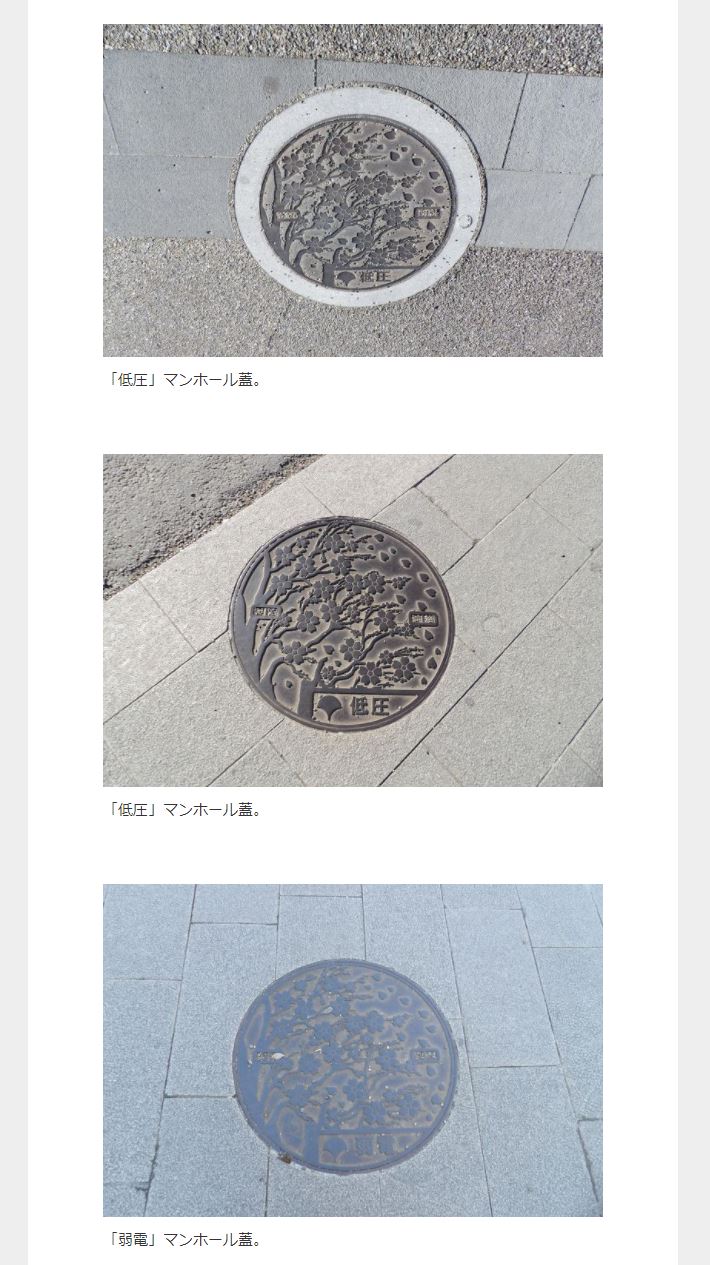 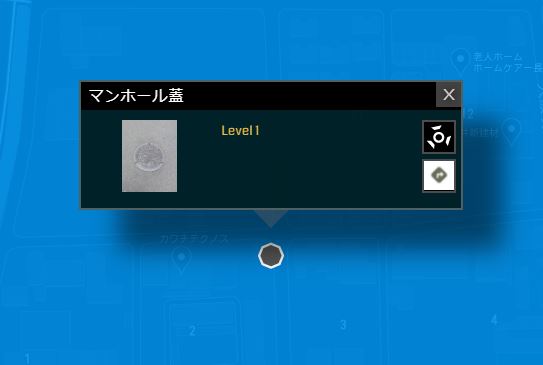 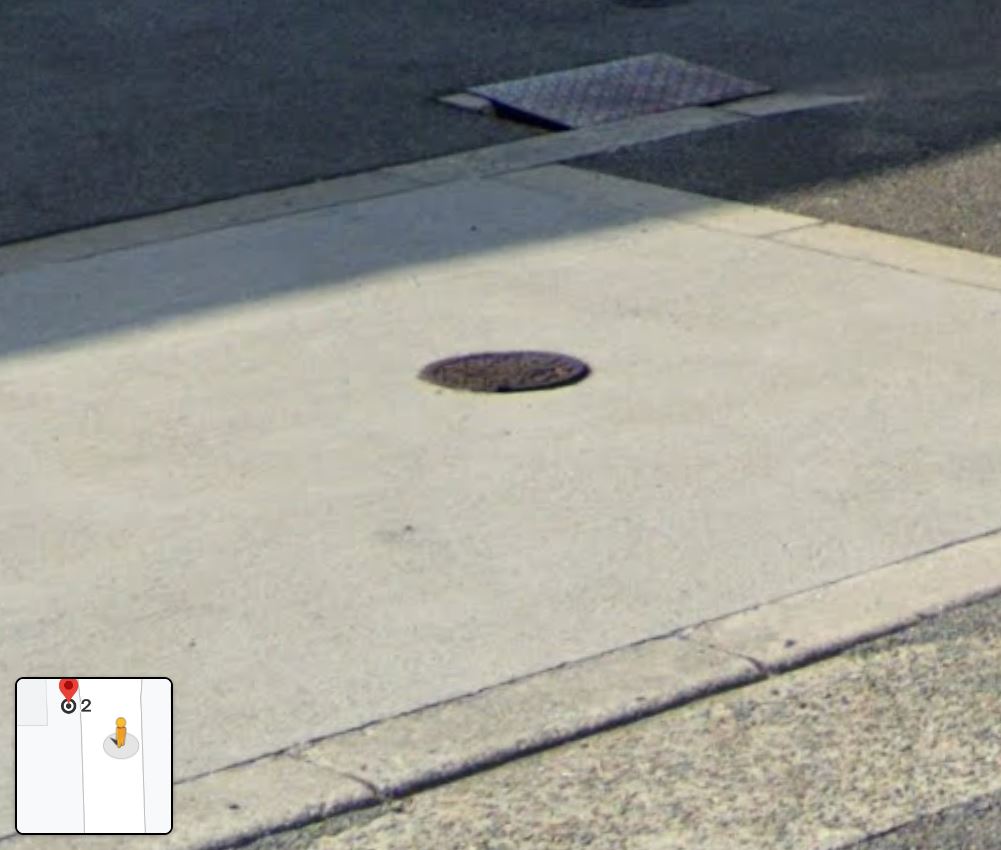 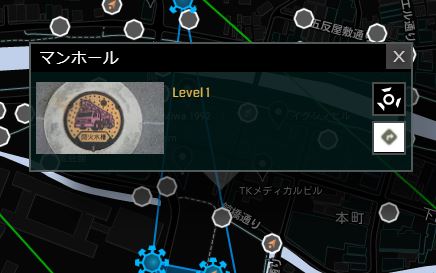 This Wayspot is located in the car park of a hospital,

And the Wayspot is located in the parking lot of a hospital and cannot be seen from Street View. 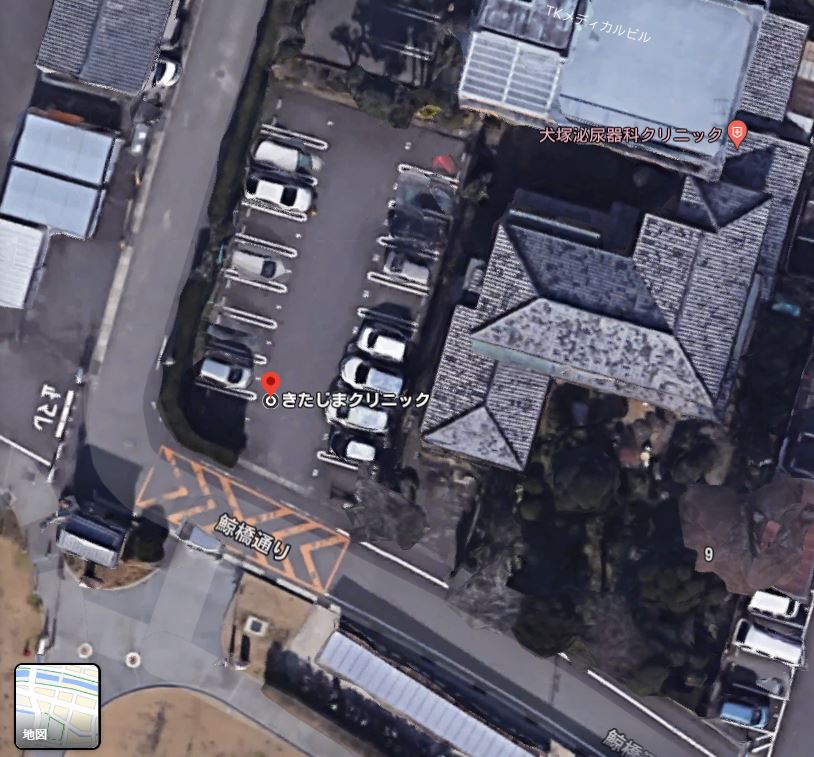 The background is filled with yellow paint, and in the middle is a fire engine.

This manhole cover can be seen all over Japan.

The fact that this is a Wayspot means that you are playing around a firewater tank that is there for firefighting purposes, which is an impediment to emergency firefighting.

As an example, we quote the following page from the official website of Hanamaki City, Iwate Prefecture, Japan. 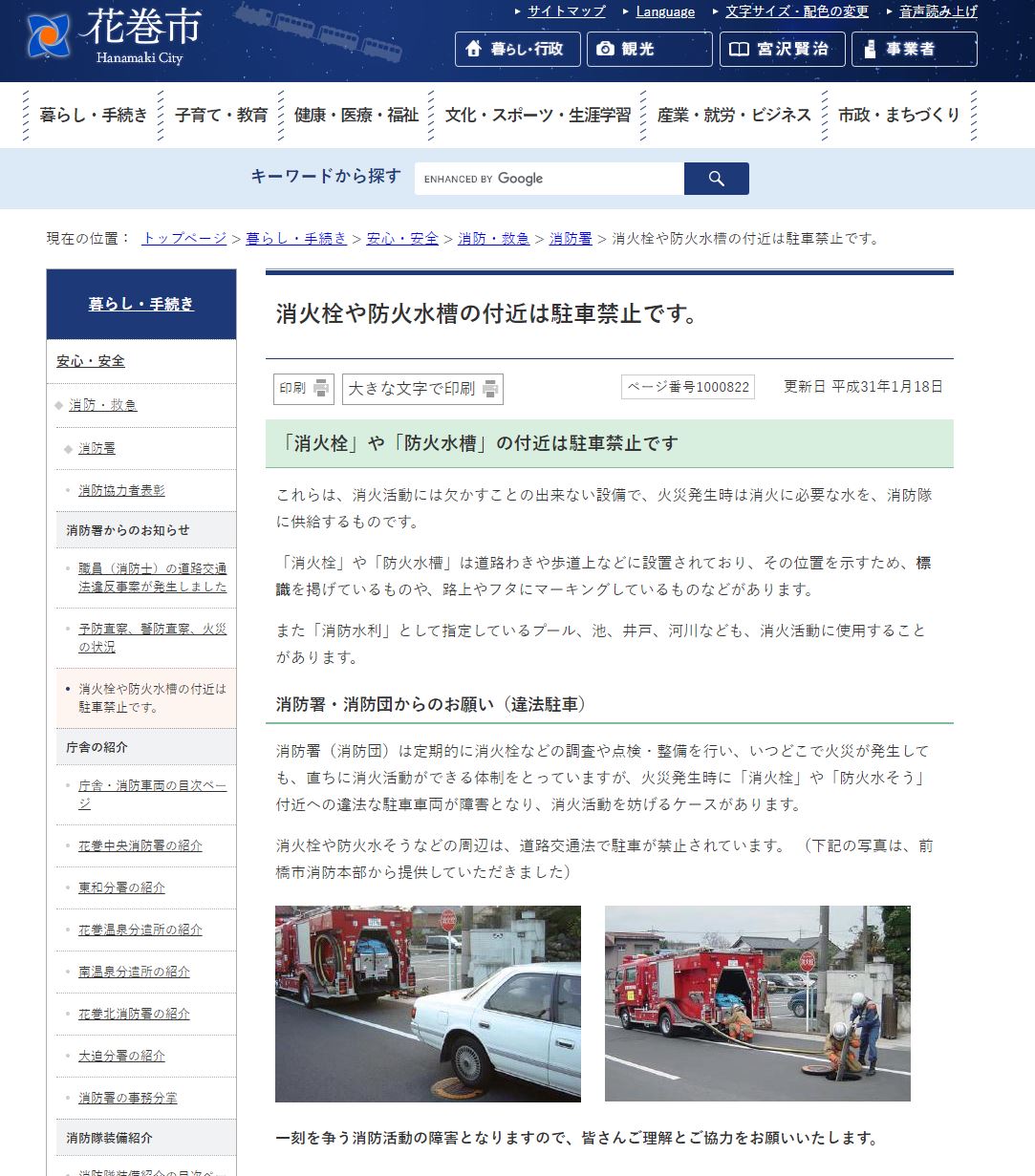 The sub-heading reads "Parking is prohibited near fire hydrants and fire tanks. It states

Fire tanks and hydrants are essential for firefighting and provide the fire brigade with the water they need to extinguish fires.

It may not have been necessary to give an example, but it is clear that it is not appropriate to accept the lid of a firewater tank as a Wayspot.

In addition to fire tanks, there are also manhole covers stamped with the name "fire hydrant" throughout Japan. As an example, here is a PDF file published by Yokkaichi City, Mie Prefecture. 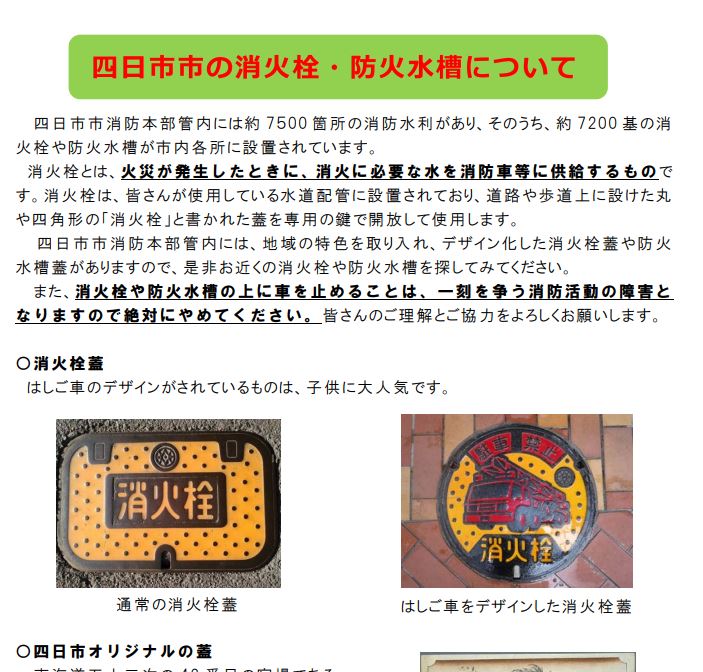 I hope you can see that it is the same design as the yellow manhole cover with the fire engine on it, for which we got the screen capture in (c).

The same manhole cover exists all over Japan, not only in Nagasaki and Mie prefectures.

The examples given here (A) to (C) are just the tip of the iceberg.

In Japan, many mass-produced manhole covers have become Wayspots. 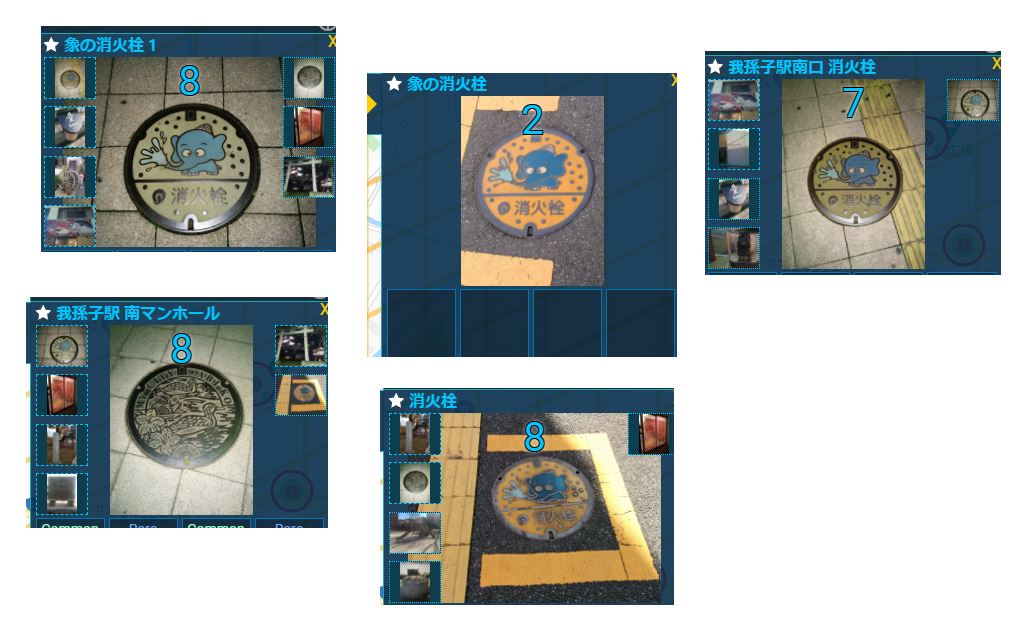 Of these, we feel that the number of manhole covers examined is more than 1/30th of the total. 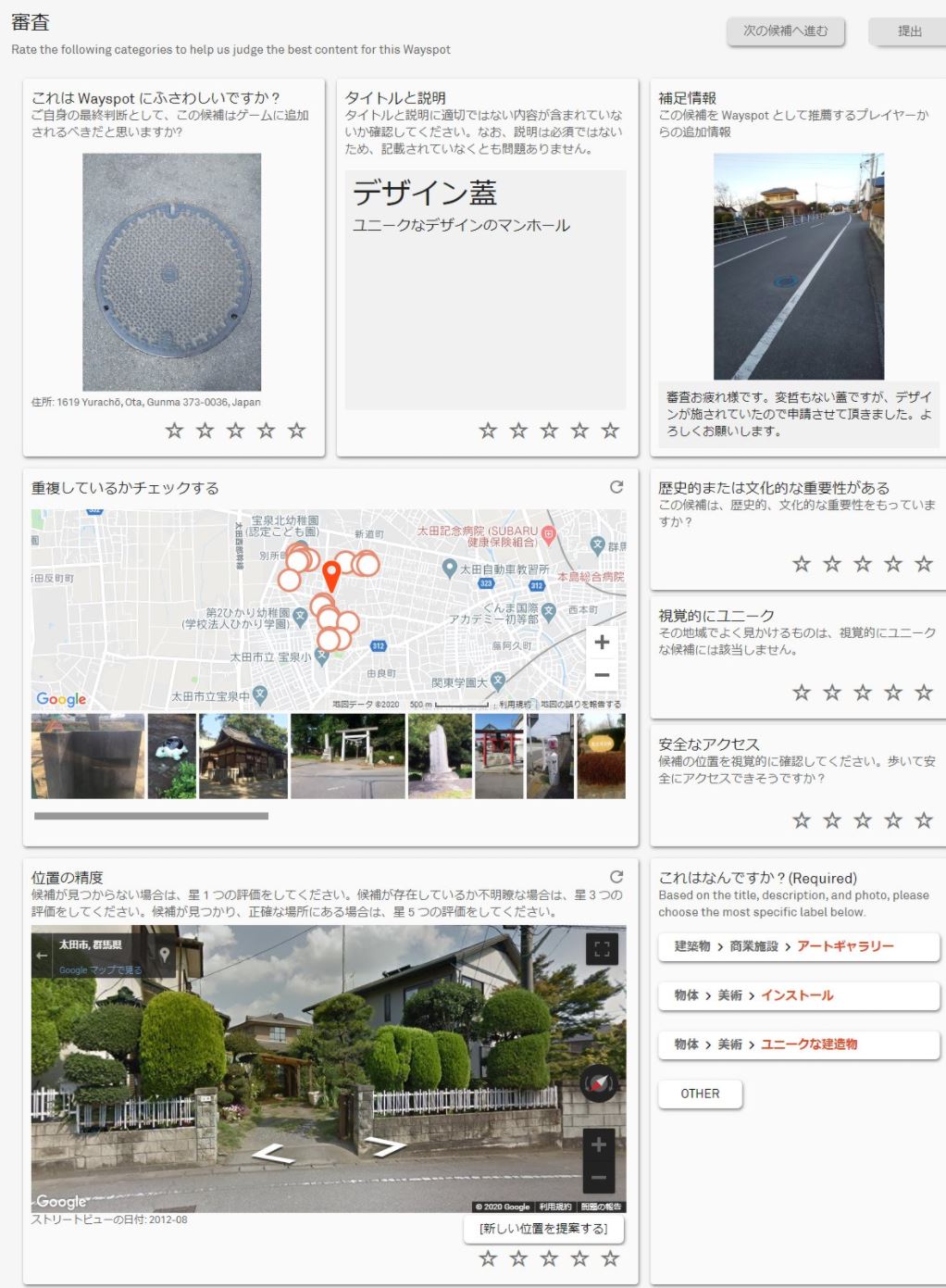 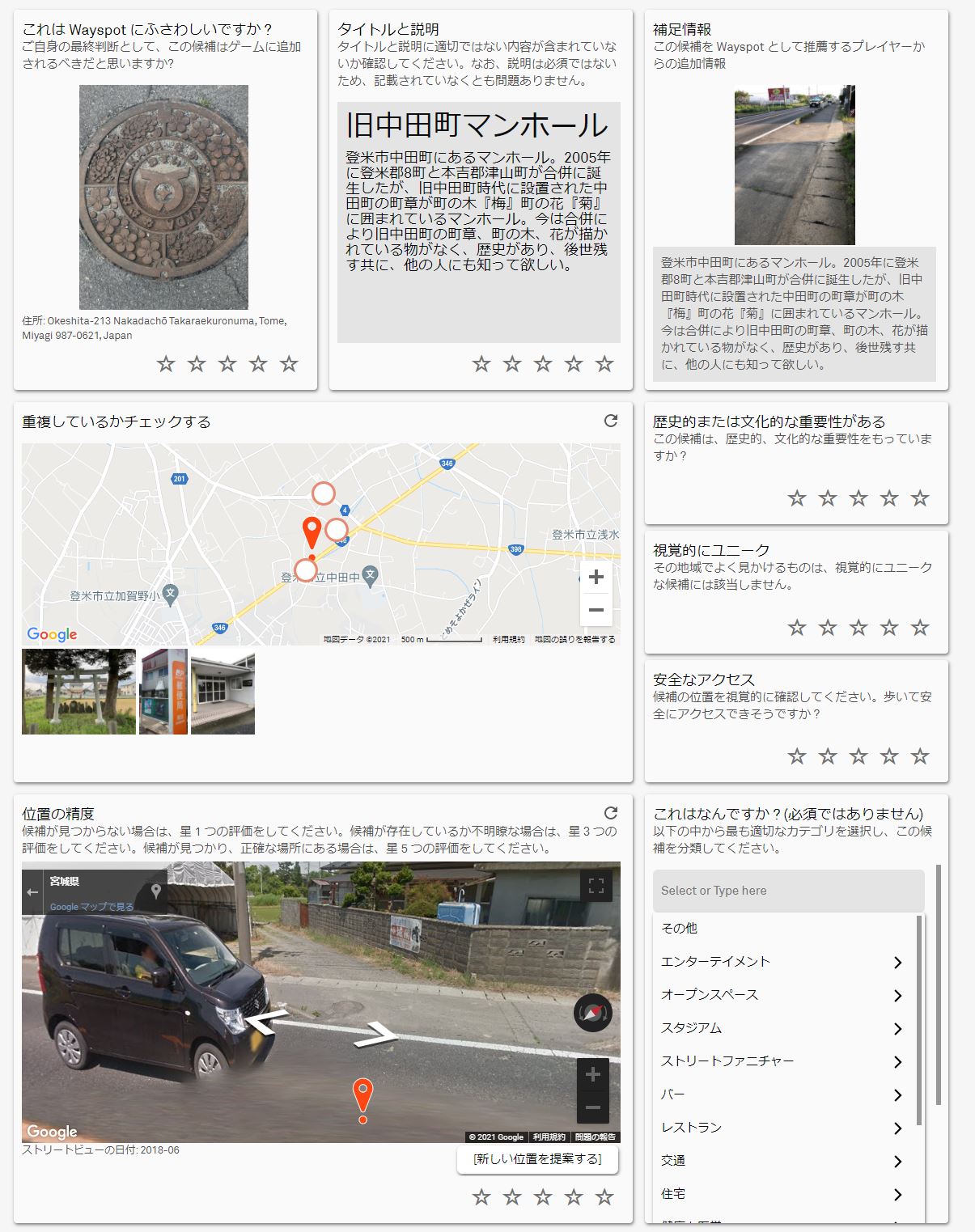 The "mass produced manhole covers" that are already LIVE as Wayspot are a bad precedent.

Even in a single town there are hundreds of mass-produced cast-iron manholes of the same design on the roadways and footpaths.

But it would be a mistake to put it online as a Wayspot, because there are a lot of manhole covers with exactly the same design in that town.

Japanese manhole covers are not only unsuitable for Wayspot because they are mass-produced.

There are other reasons too.

As a matter of course. It is problematic for us to use the manholes themselves, or the manhole covers to go down into sewers and culverts, as a place to play.

They are located, for example, on the carriageway, which can be dangerous.

Not only are manhole covers over the carriageway applied for, but also, as mentioned above, there are those who apply for covers attached to water tanks associated with fire extinguishing systems.

My friend tried to request removal from the scanner andn I written to Ingress Compunity(JP) regarding a mere manhole cover that already existed, but I received several rejections.

I thought it was obvious that it was "mass-produced" and "dangerous", so I applied for its removal.

The person in charge who made the decision of rejection did not think the same as me at that time.

Name of the portal: でべそマンホール

Reason for complaint: This is a very common manhole before the surrounding area was asphalted or cemented to make the horizontal level the same as the surrounding ground.

It is a very common manhole. It is a mass-produced product and there is nothing unique about it.

The manhole and its cover are in the process of being constructed and have been submitted under the name "DEBESO MANHOLE(*outie manhole)".

When the construction is completed, concrete and soil will be placed around the manhole to create a flat surface.

Yes, it is just a manhole. It is a manhole cover.

Manhole covers are useful because they prevent us, pedestrians and cars, from falling through the holes.

It is not a good idea for mass-produced manhole covers (and manholes) to go ONLINE as Wayspot, an entity that is in line with the philosophy of Wayfarer!

Would you consider the numerous "mass-produced manhole cover Waypot" in Japan to be appropriate?

For more information on the number of manhole covers in Japan, please refer to Wikipedia.

Wikipedia Manhole (in Japanese only)

There are about 15 million manhole covers for sewers alone.

The number of manhole covers for electricity, telecommunications, gas and water storage tanks is far more than 15 million.

In my opinion, it is not a good idea to Wayspot each and every one of these mass-produced manhole covers.

Manhole's lid (in Japanese only)

As a sample, here are two photos of "design manholes".

They are coloured with several paints, and at first glance they may seem colourful and interesting, but they are also mass-produced.

They exist in the hundreds, with the same design, in every single municipality.

Even a simple cast iron mass produced manhole cover can be seen on IntelMap as a Wayspot LIVE all over Japan.

It would be a mistake to continue to use mass-produced manhole covers as Wayspots.

There are, of course, a few unique manhole covers in Japan that are not mass-produced.

These one-of-a-kind manhole covers have an artistic quality and can be described as works of art.

If you look at the official website announcing them, you will see that these special one-off product manhole covers are placed in places where road safety is taken into account.

In Japan, there is a culture of admiring the special, one-of-a-kind manhole covers that are not mass-produced.

Many of these exist as Wayspots.

The fact that these special, one-of-a-kind manhole covers exist as Wayspots is a welcome development.

I don't want to remove or reject all the "manhole cover Wayspots" that exist in Japan.

I would like to inform you that mass-produced manhole covers are not suitable for Wayspot.

As a sample, here are some examples of special manhole covers that are not mass-produced

(*Many of them are special covers with animated or cartoon characters. )

From the official website of Tokorozawa City, Saitama Prefecture.

Some samples from Google Image Search:. 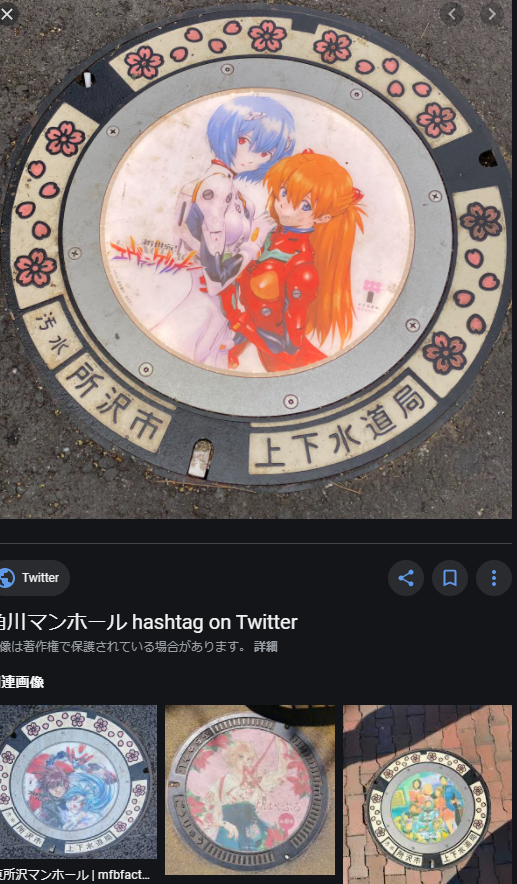 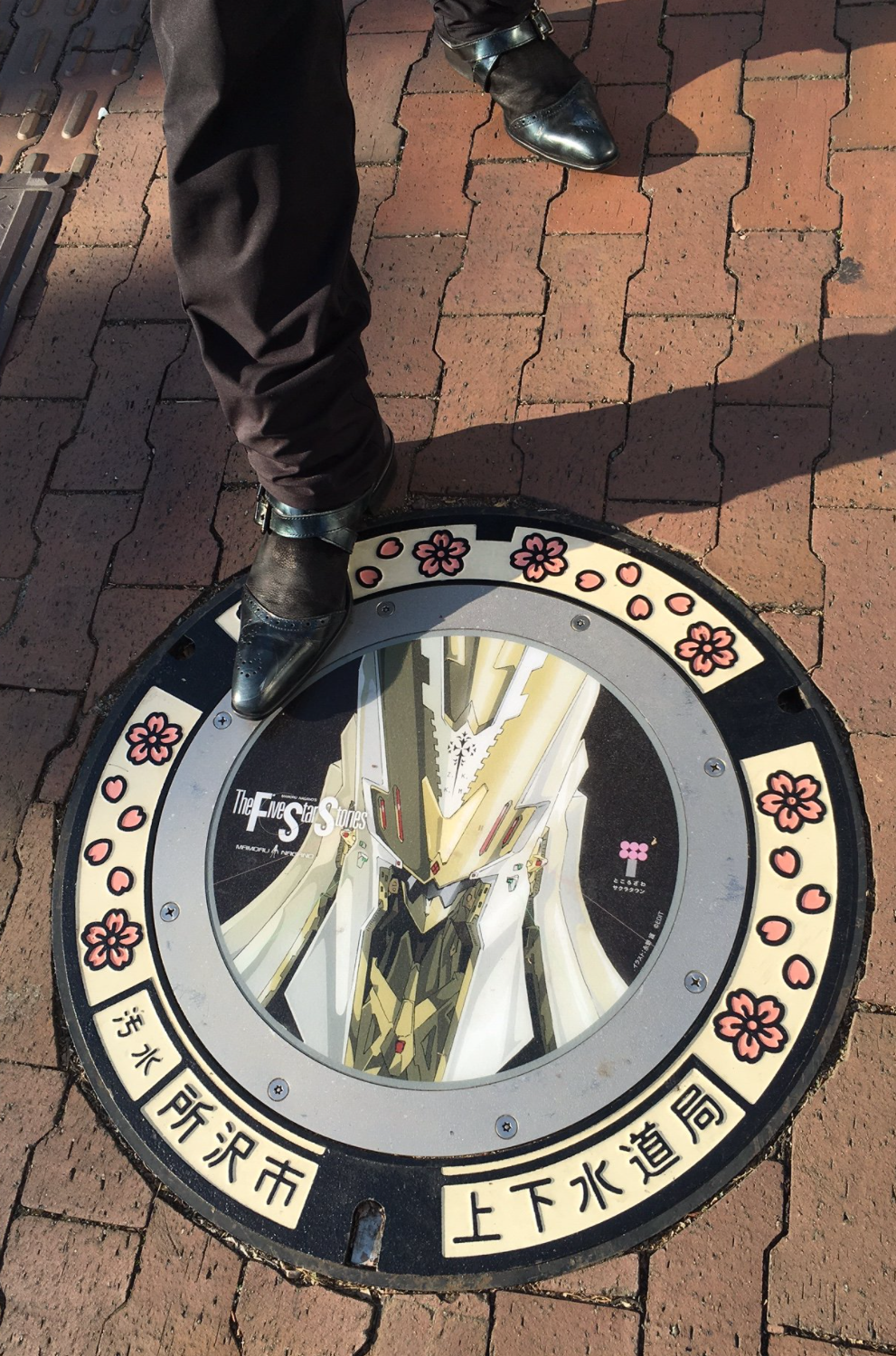 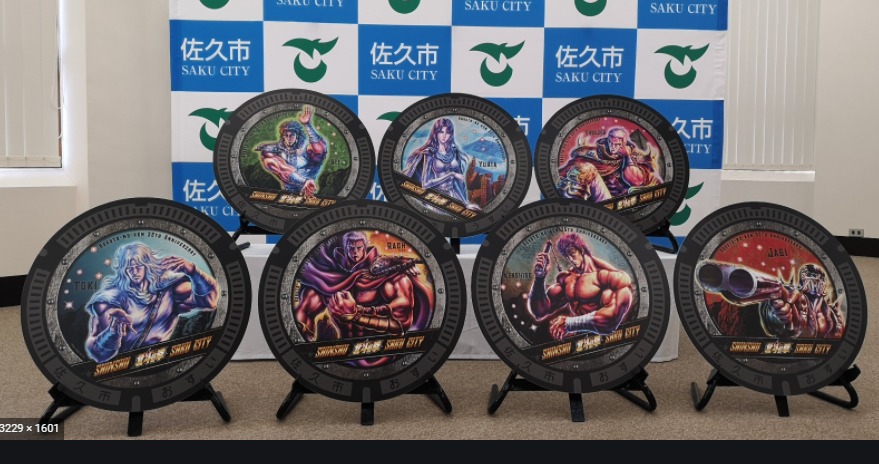 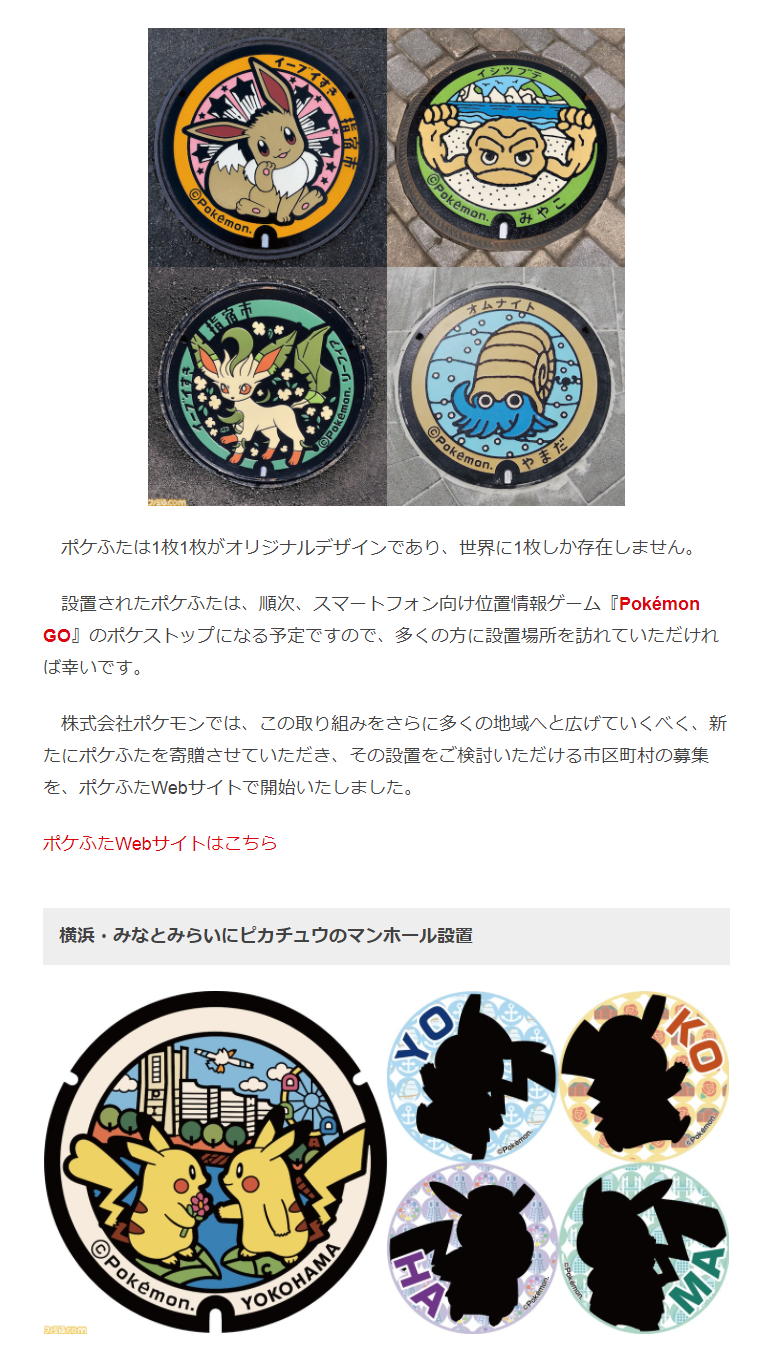 (In other words, if the Wayspot for this pocket lid exists outside of Japan, it proves that it is a Wayspot that has been falsely applied for.)

If you open the official website where these are presented, you will see that

Even if it is a manhole cover, it is special.

(And they are different from most mass-produced manhole covers in that they are placed in a safe place.)

I want you to know that in Japan, there are still mass-produced manhole covers that deviate from the Wayfarer's philosophy and the Wayfarer's rules in Japan.

I would like you to remove Wayspots that you think deviate from these rules.

As mentioned above, we can tell you that there are more than one or two such "abuse Wayspots".

I would be a happiness if all the ”mass-produced manhole cover Wayspots" in Japan were removed, except for the ones that use special, one-of-a-kind manhole covers.

Is that difficult to realize?

When my friends and me find "mass producer manhole lid WAYSPOT" in Japan's Intelmap and real world,

Would you consider removing those inappropriate Wayspots if I provide the following information in this thread?

1)Title of the Wayspot:

I understand that this is a very difficult topic to deal with as it is not about one or two Wayspots.

If you say yes, then I couldn't be more pleased.

And when you do, I will give you my most sincere thanks.