Hello, before I get started, I want to share the objective of this post, because it is going to be very long. This is not a ”drama” or “callout” thread. The purpose of the information provided is to show that the admins of the “Wayfarer - Global Reviewers” Facebook group have collectively broken the following rules from Niantic’s Terms of Service:

(Note: I have broken down the key points into layman’s terms below, but I still recommend reading these relevant excerpts, as at the end of the day, the rules are in Niantic’s words, not mine) 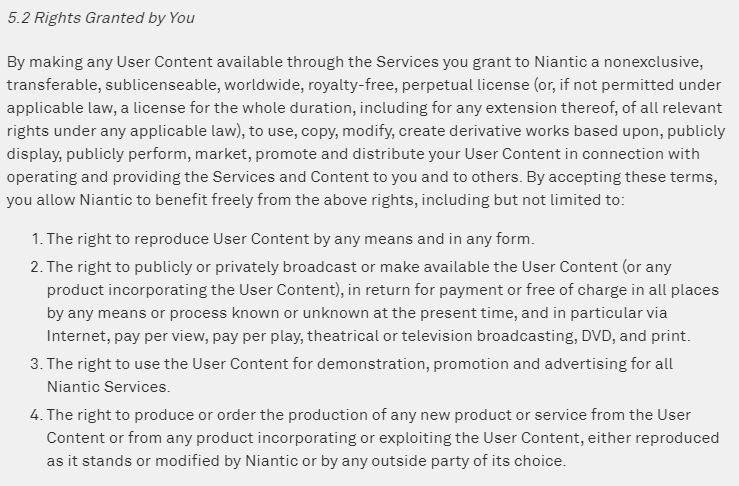 In layman's terms the key points from these excerpts are below:

Several days ago, an Admin of the “Wayfarer - Global Reviewers” Facebook group shared a photo of a newly painted mural they had discovered. The mural was beautiful, and presumably would meet Niantic’s eligibility and acceptance criteria. The admin expressed their intention to submit this mural

A couple of days after this, another user ended up reviewing this nomination, and shared the submitted nomination to the group. This user pointed out that the nomination’s description was a direct quote from a third party website, thus meeting Niantic’s Rejection Criteria, and violating both the Content Guidelines and Niantic’s Terms of Service.

The majority of users who commented on the topic, including the admin who had originally shared and submitted the mural, incorrectly argued in favor of the mural’s acceptance, claiming that the description was fine. The admin quickly chimed in to share their reasoning that they have seen plenty of similarly quoted descriptions already in the game already, but later offered additional arguments such as “Do you really think Niantic wants official titles but not official descriptions”, and “My partner’s a lawyer and would point out that typing it yourself is not a copy and paste”. The faulty reasonings for accepting the mural among the general commenters ranged from people just misunderstanding or misinterpreting the guidelines, people arguing that the third-party website was not actually a third party, that the photo was good enough on its own, that “Niantic doesn’t care about us, so why should we care about them”, or even “Niantic should pay me if they want me to care”. While some of these should obviously be incorrect regardless of what the submitted wayspot is, the admin only took the time to correct those arguing against their wayspot. The Admin eventually shared that they posted on this forum for clarification, sharing that “We shall see if they respond to my request for clarification”. After generating 184 total replies, the Facebook thread was inevitably closed for further comments

Several threads about this wayspot and topic ended up getting posted on this forum, however this thread, posted by the same person who submitted the mural (the Facebook group admin), was the one that ended up drawing the eye of Niantic. Not only did @NianticGiffard chime in to confirm that the Wayspot did not meet the guidelines, they went as far as to edit the description of the Wayspot to remove the offending quote. The user then doubled down and went on to request additional clarification as to whether or not an artist’s statement was a third-party source. Giffard then responded again, confirming that any such statement exactly copied from an external source is not allowed, as well as citing explanations from myself (source one, source two) as well as another explanation from @GearGlider-ING . Given the extreme clarity of these clarifications, you would think that this would pave the road to an easy resolution within the clearly misguided Facebook community, however, that is the opposite of what happened.

After Giffard posted his first clarification on the forum, several posts about it would be posted by different users in the Facebook group. The majority of the posts were just a screenshot of Giffard’s comment, with some outliers, such as a screenshot of the updated description on the POI in question. The admins of the group quickly removed these posts and began muting users (preventing them from posting anything for days or weeks) for trying to spread the news of this clarification. Eventually, the admins did allow one post of the original clarification to stay, yet another screenshot of Giffard’s first comment, however the post was locked for comments and users were unable to discuss or ask questions about this much needed clarification.

Today, in response to Giffard’s second clarification comment, even more posts sharing the clarification were posted to the group. All of these posts had their comments swifty locked and were removed shortly after they were posted, and any such user was muted from posting the group, with mutes ranging from one week to one month. Users began to make posts asking the admins why such clarifications from Niantic were being removed, and these posts were also locked for comments and removed, without being given an answer. Several users sent messages to the group admins seeking a reason for the removals and also did not get a response, despite one admin making two posts entirely unrelated to these clarifications and clearly being online. Eventually, one post was allowed to stay, showcasing screenshots of both of Giffard’s comments, however, this post was once again locked for comments immediately after being posted.

Eventually, the admins did make a post about the situation using their shared account (again, with the comments locked), which stated the following:

The topic how an artist's text has been quoted in the submission for an individual POI has been discussed in numerous posts in this group.

All relevant views have been expressed extensively in several recent posts.

In the interest of keeping this group low-spam, additional posts about this identical issue won't be published for the next few days.

Thank you for your support.

Here is the problem: This topic was not discussed in numerous posts in the group. In fact, the conversation about the topic was only discussed one time, and the post was closed for discussion prior to Niantic ever providing their clarification. Every conversation after that was either swiftly deleted, or swiftly had the comments locked to prevent discussion. People who attempted to discuss the topic and educate the community were silenced and punished, being muted for weeks at a time. There is no possible way that “all relevant views have been expressed extensively”, unless the only “relevant” view is that this type of description should have been fine. This statement heavily implies that Niantic’s own clarification is not relevant. And given the amount of censorship that occurred, this truly seems to reflect the admin team’s mentality. Don’t forget that in the original post, the admin was clearly waiting for clarification from Niantic, but once they got the opposite answer to what they were looking for, instead of sharing that with their own group, the censorship began.

There is an extra layer to this situation however, which revolves around Facebook’s algorithm for catering posts to users. Unlike this forum, Facebook does not just show posts and conversations in order of their most recent activity, Facebook uses an algorithm to cater posts and conversations that it believes the user will find more interesting and engaging. As a result, Facebook is far more likely to show users a post that has 184 comments, rather than a post that has zero comments, even if the post with 184 comments is several days old. As a result, the few posts that were approved and immediately locked were far less likely to be seen, and possibly intentionally so. Additionally, Facebook also prioritizes posts from group admins when catering posts to users. This should mean that more users saw the admin’s message, however, this may have also been muddled as well. As I noted earlier, around the time that people were reaching out to the admins this morning about their removed posts, one admin made two posts unrelated to the issue at hand (one about a footbridge, and another about a different mural), and of course, those posts were allowed to have their comments stay open. These two posts conveniently were posted right before, and right after the admin’s post regarding the issue at hand, and again may have been an intentional attempt to help bury their own statement, while hiding behind the fact that they had now technically addressed it.

In the very least, it is highly suspect that the admins have allowed the original post with 184 comments to stay up, given that the extreme majority of users in that thread are advocating in favor of the ineligible description and violating Niantic’s rules. It seems very much like the group admins have intention to allow the disinformation to stay visible (because that is the way they think things should be), while trying to delete, bury and stifle awareness of Niantic’s own guidelines and clarifications.

At this point, I believe I have demonstrated that there is/was an intentional attempt to censor users and silence the spread of Niantic’s clarification, to the point that it willfully and intentionally miseducates users on Niantic’s official rules and guidelines. This would appear to be a violation of Section 5.2 and Section 6 of Niantic’s Terms of Service, as it is an attempt to disrupt and interfere with the legitimate operation of Niantic Wayfarer, by means of undermining Niantic’s clarifications and manipulating a group consisting of nearly 10,000 people into violating the Wayfarer guidelines, which in this specific case may put Niantic in legal risk of violating copyright and intellectual property laws.

I know many people who frequent this forum were affected by the censorship of the Facebook group admins, and I hope you all will share your experiences in the comments here.

The “Wayfarer - Global Reviewers” Facebook group is, to my knowledge, the second largest Wayfarer fan-run community, containing approximately 9,800 members. It is second in size only to the /r/NianticWayfarer subreddit, which has 14,400 members. The Facebook group is a common entry point to Wayfarer for new users, as one of the group admins has joined a plethora of “local” Pokemon Go Facebook communities around the world, and frequently solicits their members to join the “Wayfarer - Global Reviewers” group to learn about submitting and reviewing Pokestops. This means that the group is particularly vulnerable to people unfamiliar with Wayfarer and Niantic’s guidelines, making these users especially vulnerable to falling for a disinformation campaign.

This is not the first time that the “Wayfarer - Global Reviewers” admin team has been found spreading misinformation. In an incident in April, the admins were found to be spreading misinformation in regards to POIs that were close to private residential property. The admin incorrectly advised that there was a blanket ban on any such nominations, and users who spoke out against this incorrect information had their comments deleted and were muted without just cause. In another incident in February 2020, the admins were found to have been promoting nominations located directly on private residential property, and as per usual, were found to be muting and censoring users who stated otherwise. It is my understanding that this incident ended with an intervention by @NianticCasey-ING. It frankly seems like it is time for Niantic to intervene once again.