First of all, I would like to explain that this is not a story about one Wayspot.

What I'm going to talk about is a series of abuses that have been occurring around the exits of Shinjuku station.

For your information, Shinjuku station is the busiest station in the world according to Guinness World Records in 2018, with an average of 3.59 million passengers per day.

The place we are going to report on is the area around the two huge buildings, the JR East Head Office Building and the Odakyu Southern Tower.

For more than seven years this area has been the site of an annual event named "Shinjuku Creators Festa".

Almost all of these exhibits are temporary and are removed from their locations after the event.

We can count only one that is still in place after several years.

"For the first time, Shinjuku Creators' Festa 2015 has used Ingress to register each artwork as a portal!

This is the first time we have used Ingress to register each artwork.

And, by AG, also held the First Saturday event.

At the time, I was surprised by the sudden appearance of these things.

They were only temporary exhibits.

Back in 2015, volunteers, including myself, were so surprised by the appearance of Wayspot that we requested that they be removed. Some of them were removed immediately.

However, many of the temporary exhibits have remained at Lightship since then and have not been removed.

Wayfinders at the time who made Wayspots out of items that were only on display during the Creators' Festa.

It seems that they left them there for a long time without applying for their removal.

Now, they are occupied by AGs in Intgress, and gyms and Pokéstops in Pokémon GO.

In addition to those, they are now even duplicating existing Wayspots and spoofing their locations, which is where we report this time.

(What's the fun in playing a location-based game with something that doesn't exist in that location?

I can't understand their thinking at all.)

Sorry for the delay.

Let's take a look at them for you. 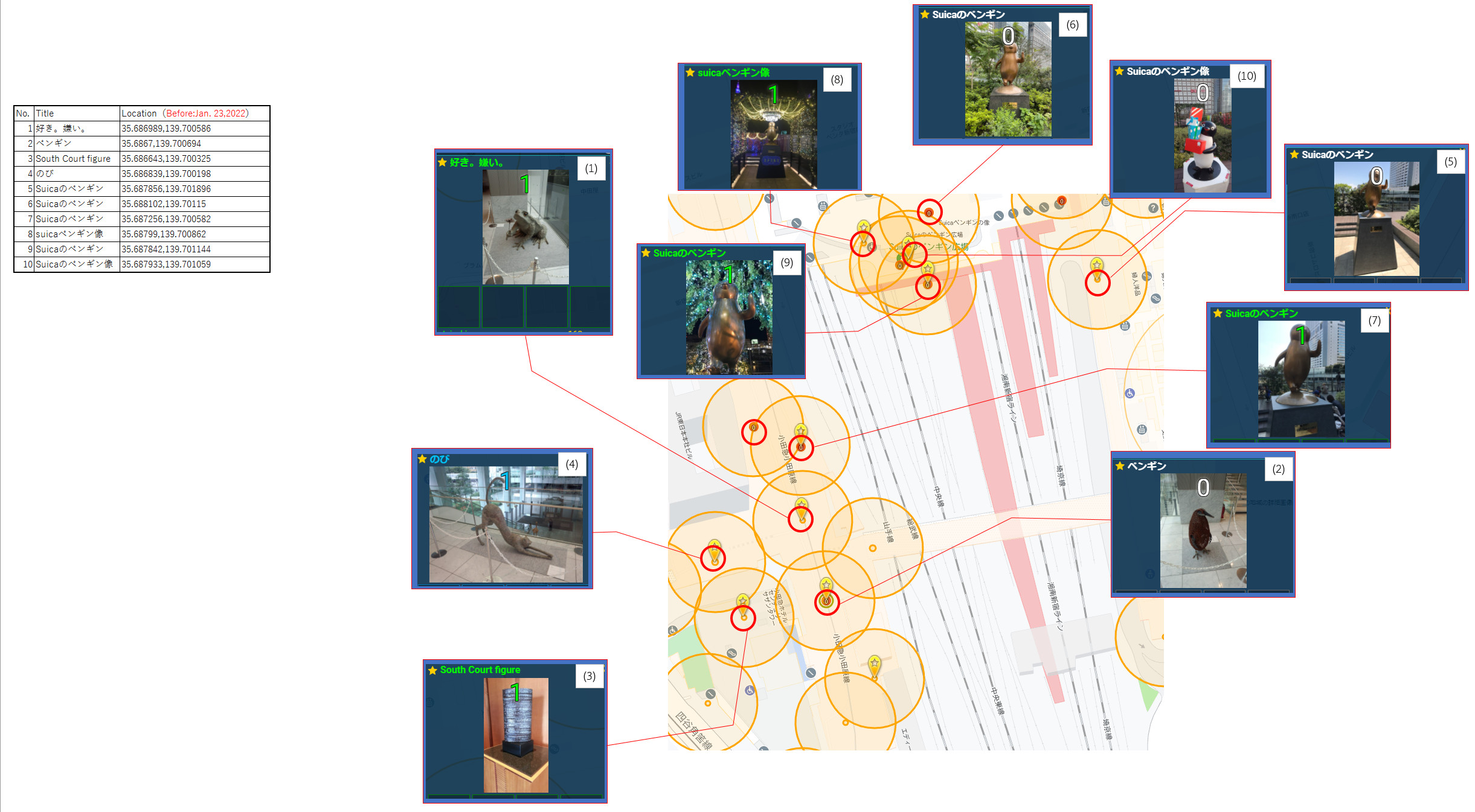 At that time, it was only displayed between these two pillars. It is no longer on display.

Note that the pin position is not even in the building. It is on the street.

And it seems that some people play in places where things that don't exist are Wayspot.

The columns and stairs in the Wayspot photo are identical to those in the following Google Street View.

The object is no longer on display.

The only thing on display is a houseplant (lol).

It's a trivial thing, but, horror of horrors, This pin position on the street,too.

Title of the Wayspot:South Court figure

It does not exist.

A convenience store called 7-Eleven opened next to this down escalator after the portal photo was taken.

In the back of the picture you can see the circular entrance, the pillars inside

The down escalator and the tiles on the floor.

Please pay attention to the position of these.

What follows is an illegal reproduction and falsification of the position of a single bronze statue.

There is only one correct bronze statue in existence.

And one of the most egregious is the creation of a fake Wayspot with a false location in the immediate vicinity of (1) to (4) above.

I'll tell you more about it now.

The following PDF is published by JR East Japan Railway Company on 6 July 2016.

It introduces the installation of a bronze statue of "Suica のペンギン".

There is only one bronze statue.

The location of the statue is indicated by a red square in item 1.

(This is the location at the time of publication in 2016.

The location as of 2021 can be seen on Google Street View (I'll explain later.).

In item 3 of the PDF, (10) is noted that the statue is a limited time exhibit. 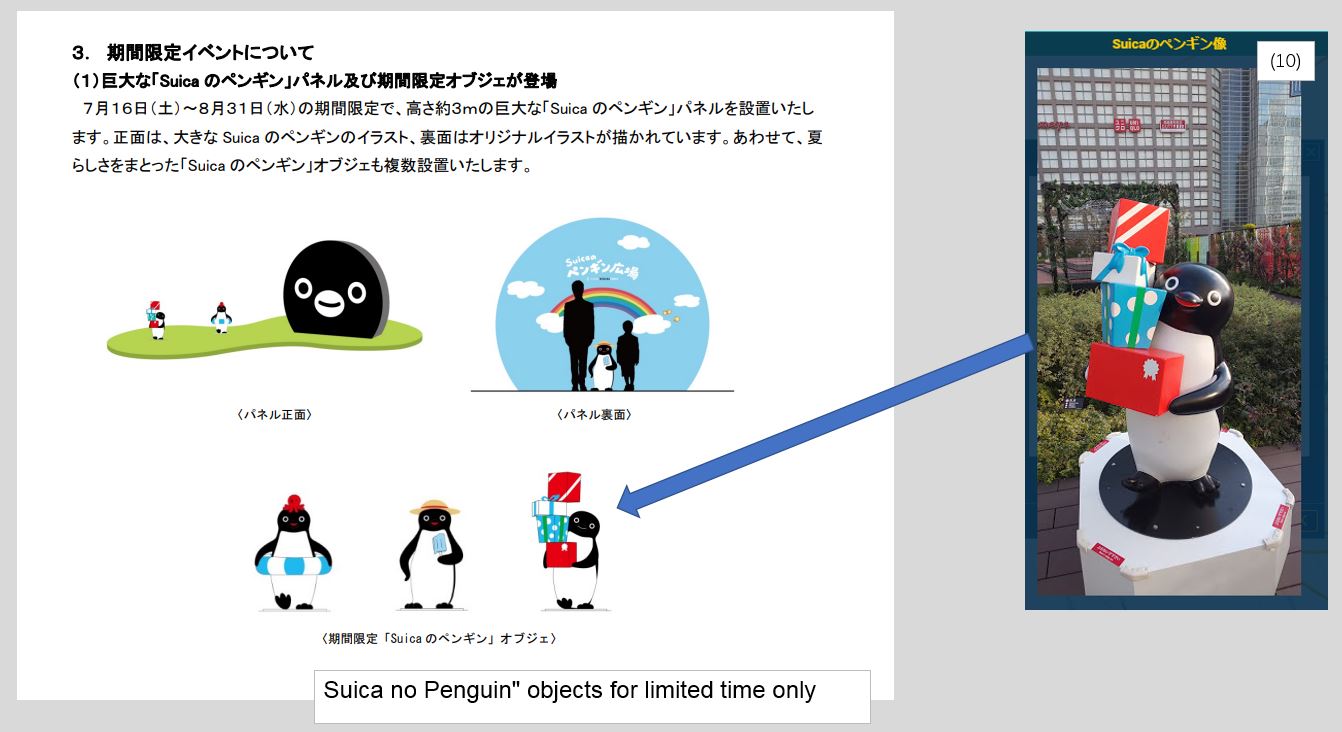 As noted in the aforementioned PDF, there is only one bronze statue named "Suicaのペンギン(Suica no Penguin)".

On 22 January 2022, I photographed this bronze statue and also took a Google Street View of it, which you can see here.

(You can see where the statue is now,by GPS tag, )

I took a Google Street View of the area on 22 January and check it on IntelMap on 23 January. The Wayspot was located as shown in the above figure "Location map as at 23 January 2022".

The title and location information at that time are as follows

The one closest to the real position is No. (9).

However, it still seems to be a little west of the real position.

The building with the distinctive façade can be seen in photos (5) and (7).

It can be seen on the far right.

Based on other street views taken in the vicinity around 2018, and information(*PDF) from 2016 when the bronze statue was installed, we can infer that

It is likely that this Wayspot existed slightly further west in the past than the current location of the bronze statue.

Nevertheless, the positions (5) to (9) are not all correct.

（The positions of (5) and (7) are off by 100m and 50m respectively. I believe that this is a deliberate act of displacement and abuse.

Here's an email I received on 24 January.

This is the result of my request to remove the "Suicaのペンギン像"(Suica penguin statue) after reporting it as a duplicate.

It says "Approved" in Japanese.

However, there are still several fakes with fake locations. 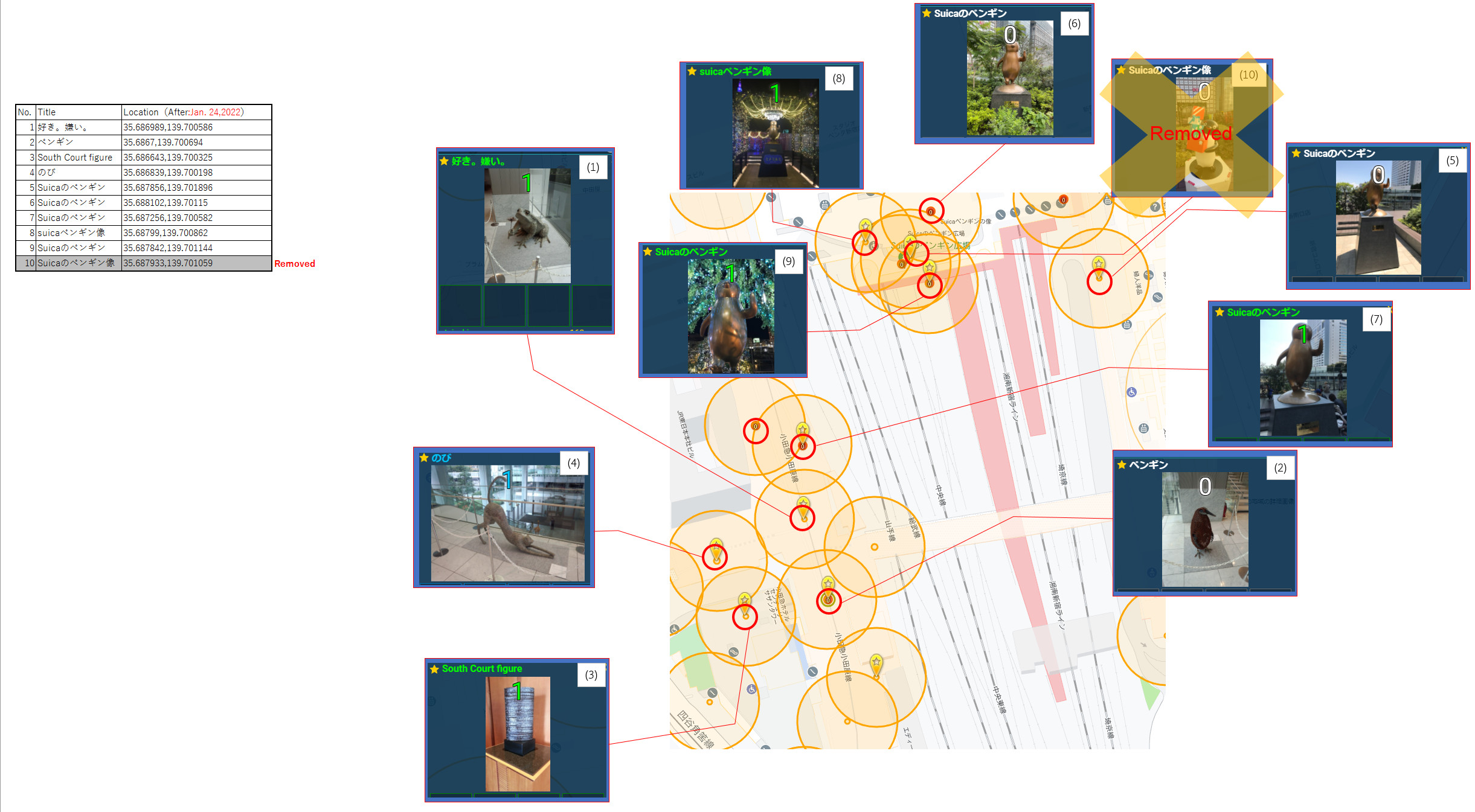 Please remove these multiple way spots that are inappropriate.

By the way, for your information.

This is a year earlier than Shinjuku Creators Festa 2015, which I mentioned at the beginning of this report.

There are some things that were wayspotted at Shinjuku Creators Festa 2014.

A temporary exhibit, registered on Wayspot under the name "ある惑星の住人 モスキート".(mean "Mosquito, inhabitant of a planet")

This mosquito is now removed.

In Wayspot, which existed right next to Mosquito.

The title was "ある惑星の住人 スカラベ”(mean "Scarab, inhabitant of a planet").

I removed this one in January last year.

In fact, it took me seven years to finally get Wayspot Removed!

It took a long time.