3rd bot wave or simply the most stupid reviewers? ... and a still not fixxed issue ....

During the last week I got a bunch of really crazy rejections for usually foolproof candidates like info boards of educational trails. Further a bunch of very strange rejection reasons, that lead again to the problems with the bot rejection waves ....

So @NianticGiffard there is a some stuff for investigation, and a very old unsolved issue is also adressed.

First of all this rejection reason is a big hint for the bot rejections, according to the older threads about the German bot rejection waves. People from federal states Bavaria and Baden-Württemberg (so those, who lived closest to the abuse hub Kempten) got lots of rejections with the subcategory reasons. During that time I had also lots of rejections, but my region (federal state Saxony) was only at the edge of the reviewing area of the bots. So the bots influenced my submissions, but not fully dominated the results. So I had an unusual high amount of rejections, but not a single one with these subcategory rejection reasons.

But now I got three such rejections within a few days ....

But before we discuss another aspect of this rejection reason:

Afaik there was somewhere an old Nia-statement, that this rejection reason should not exist, or at least low stars in the subcategories cultural value and visual uniqueness should not lead to a rejecting vote. The statement about this should be older, I guess it was from @NianticCasey-ING .... But obviously this problem is still unresolved. Down there is an example, that does have "not visually unique" as its one and only rejection reason.

Very old example and my idea, what could be wrong in the code:

Iirc I had this rejection reason only once in the past: 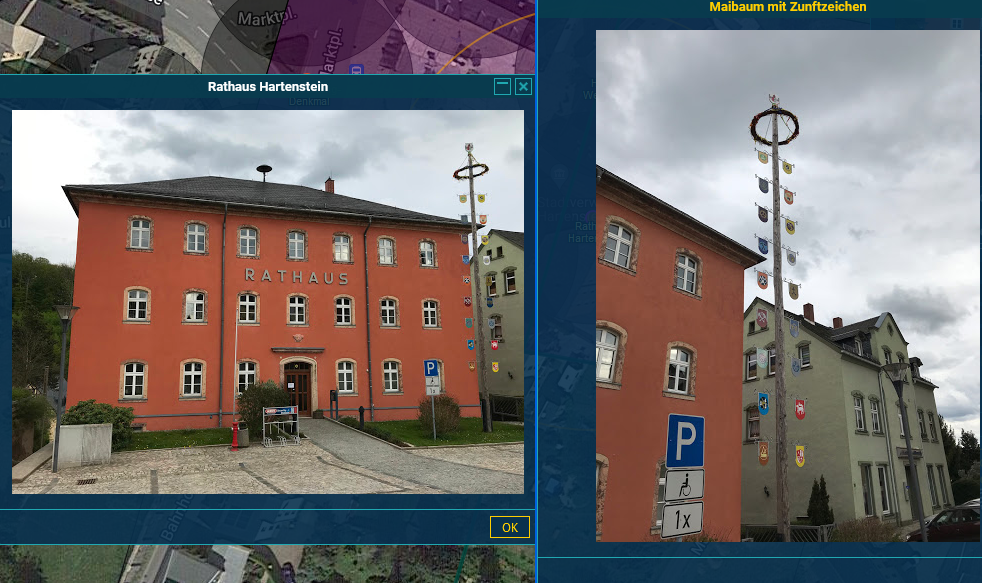 These two wayspots are a townhall of a small medieval town, and right next to it a maypole with guild crests. The maypole was the older wayspot, and had another picture back then. So more of the townhall was in the picture. I submitted the townhall, and got a rejection 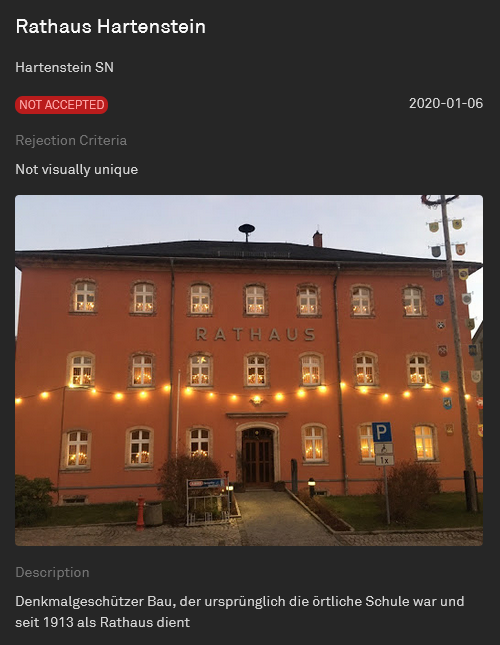 So we assumed, that a bunch of shallow reviewers, that didn't even read the texts, have voted for duplicate.

If I'm right, then it's easy to fix this: duplicate votes should count only towards a duplicate decision, and not as rejection votes for the further process.

The following examples underline this theory, since there are also existing wayspots nearby, that could have been reasons for wrong duplicate votes: 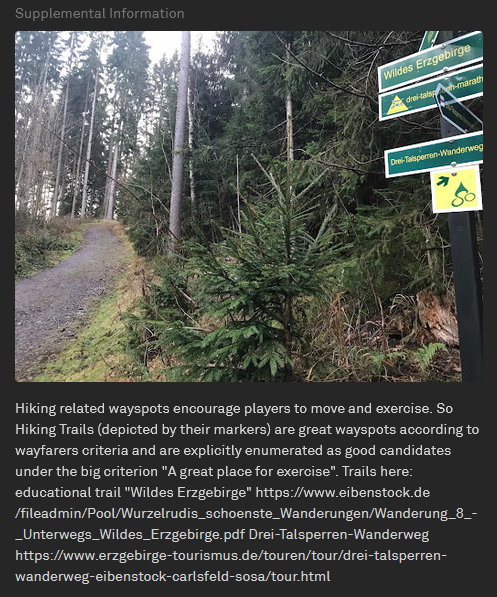 Hiking trail marker nominations have a hard time in Germany since ever. They get rejected on and on .... so surprisingly this one is without rejection reasons "Other rejection Criteria" or the other funny things, that I'm used to, like "Pedestrian Access" or "Natural Feature" .....

So it's nethertheless crazy, that this nominations is rejected only because of the subcategory. But again there are a bunch of other trail markers nearby: 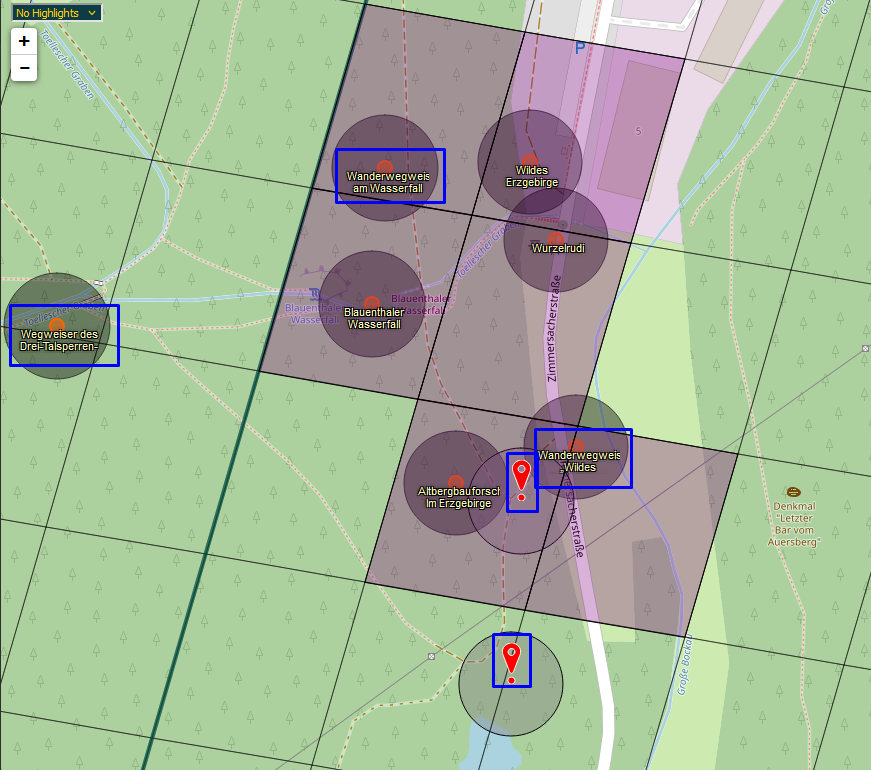 This candidate is the northern exclamation mark, the southern one is also a rejected trail marker (a weaker one, but it's still the traditional minimum: directional sign with trail name on it) 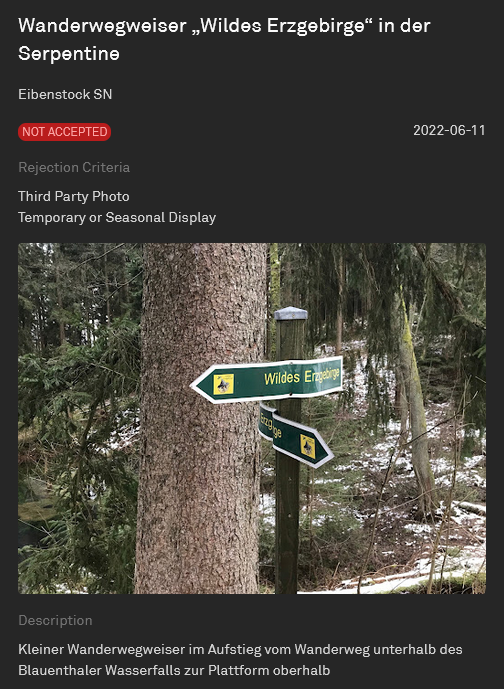 So there are three other hiking trail markers nearby:

Obviously not a single one looks identical to justify a duplicate vote. Nethertheless shallow reviewers may have chosen that. To explain, why there are so many trail markers nearby: the trails there are arranged around a waterfall. There are two different named trail around there: educational trail "Wildes Erzgebirge" and the 40km trail "Drei-Talsperren-Wanderweg" (literally translated: three-river-dam-trail).

The second one is also used as a Marathon-route, but with a few changes of the route. You can see this in the initial example - on the signs you can see signs for "Drei-Talsperren-Wanderweg" and for "Drei-Talsperren-Marathon". The educational trail also has two different routes here - one along the steep paths around the waterfall, and one, that uses a flatter and better paved route to reach the waterfall. 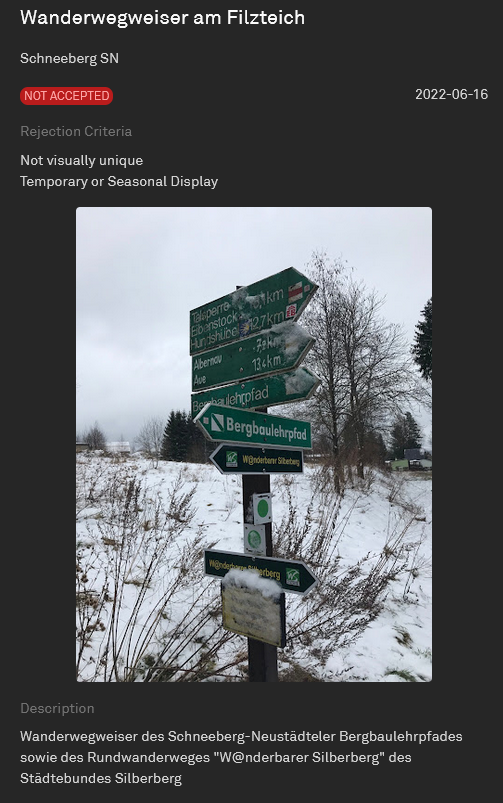 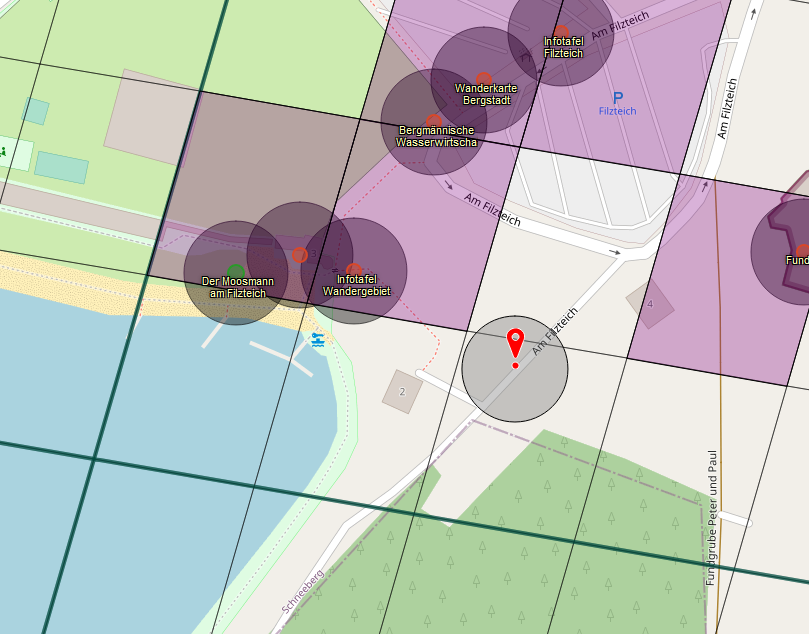 Temporary or seasonal display? Yes, snow is temporary. But not the god damn hiking trail marker. 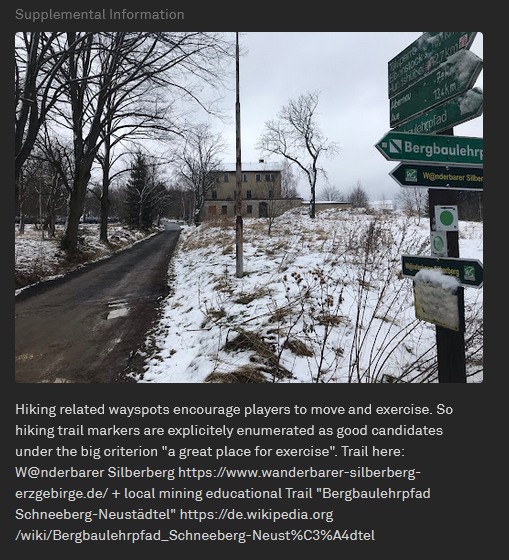 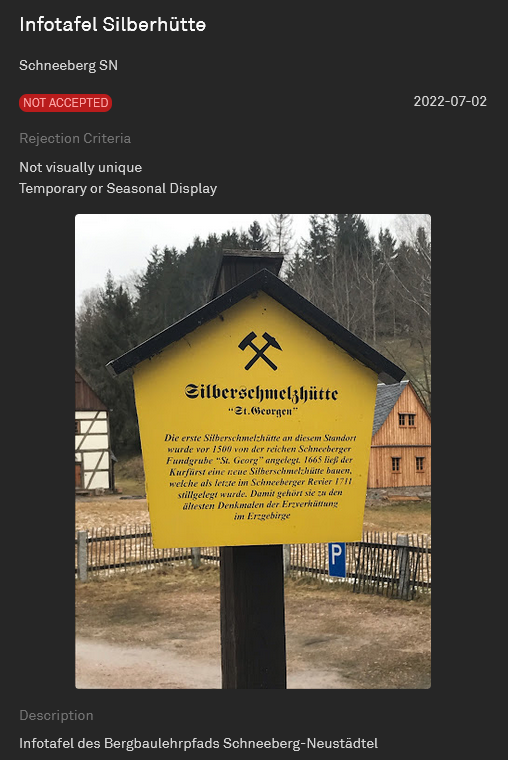 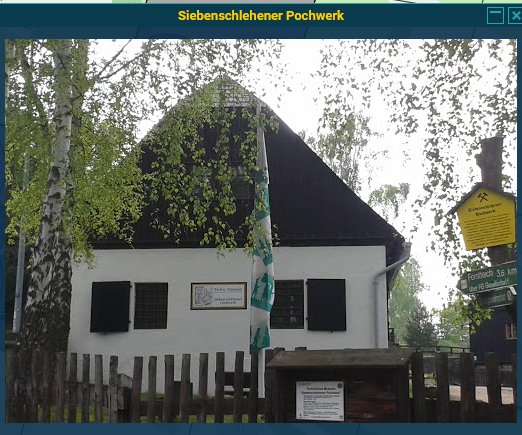 Supporting picture is taken in a way, that especially this house can be seen in the photo. So obviously a different infoboard. To distinguish them the reviewer could read the texts, but that's unsuitable ... irony off.... 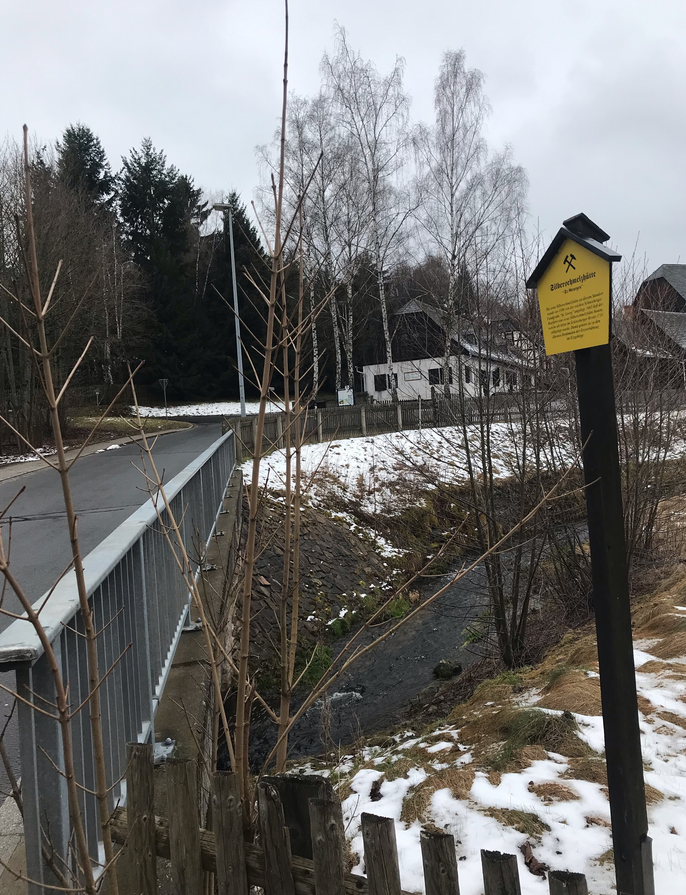 A rejection, that is so stupid, that my own explanation for this is an AI ... 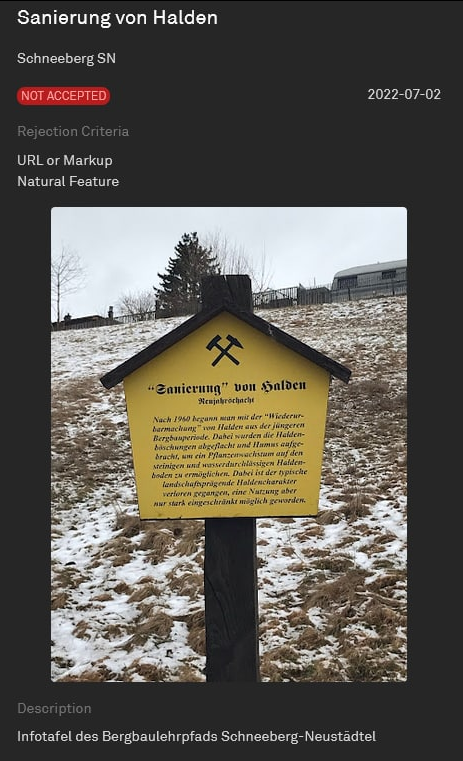 The rejection reason URL can be explained: I had a link to the wikipedia-article of the educational trail in the supporting statement. Nethertheless the persons, who vote this way, are qualified for a nice (explanatory!) mail from the staff and a (temporary?) ban. 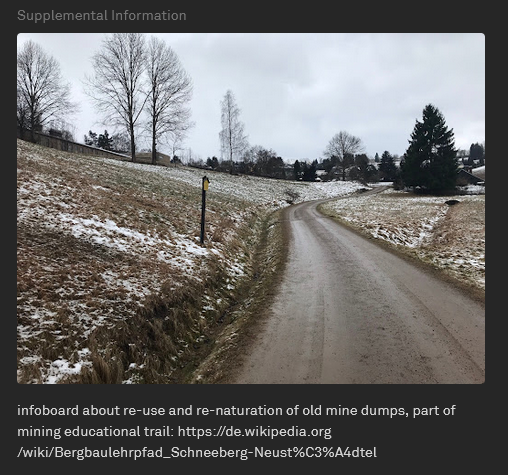 But it's totally ridiculous for me, how a person with IQ above Celsius-room-temperature can vote Natural feature here. My only idea is, that the entrance signs of nature preserved areas in Eastern Germany have the same yellow color and nearly the same pentagonal shape, for example like this one: 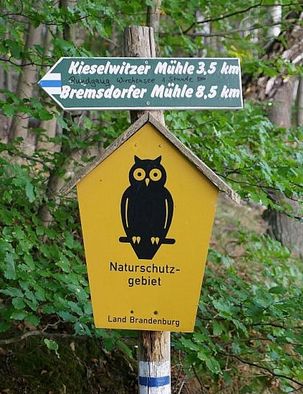 But even a DAU would see on first glance, that there is no owl, and a lot of text. Further the hammer and chisel as symbol for mining history is everything, but not a natural feature. But an AI, that learned about these nature signs could decide based on color and pentagonal shape ....

Miscelleaneous other stupid rejections from the last days 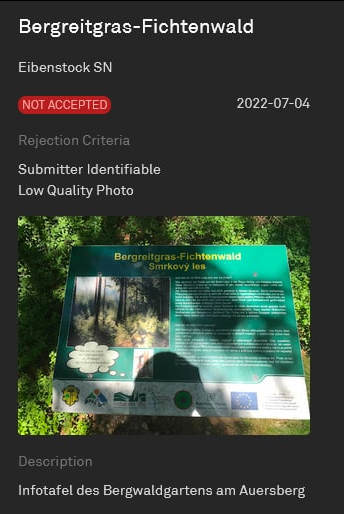 Low quality photo? What do they expect? Shall I cut down the trees, that are the topic of the educational trail for better light? 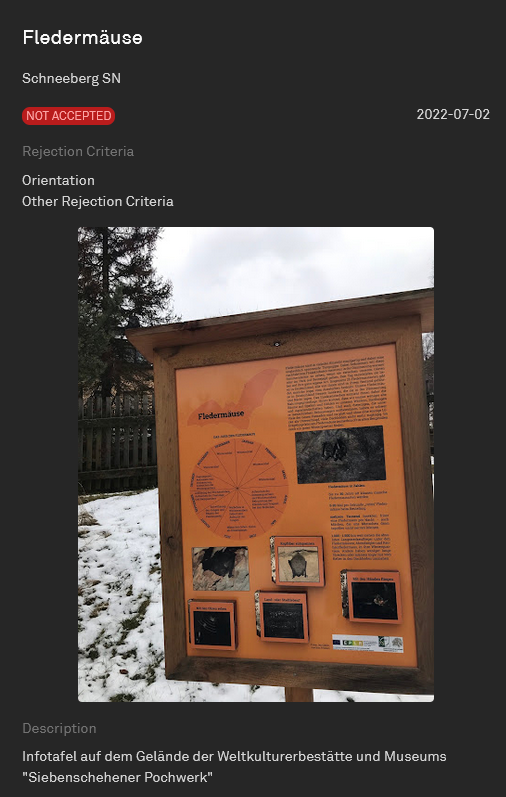 An infoboard fulfills no criteria?

This 3° angle for "Orientation"? Srsly? 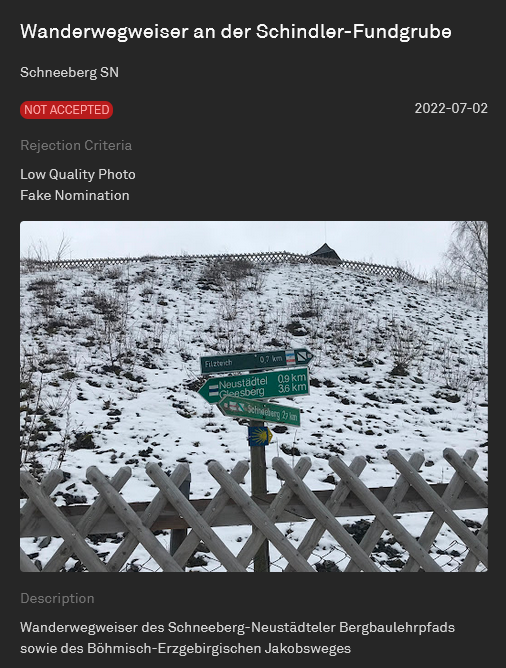 Fake Nomination? In Germany most trail marker submissions are rejected against the criteria. Why should someone start faking them, especially if its proven by a wikipedia link in the supporting statement? OR did the reviewer reject because of a winter photo during summer? Did someone tell them, that nominations can last for years in the reviewing process? I have open stuff from summer 2020 ....

Low quality photo? Maybe I could have gone closer, but I didn't want to jump over the trench .... with snow and ice ... 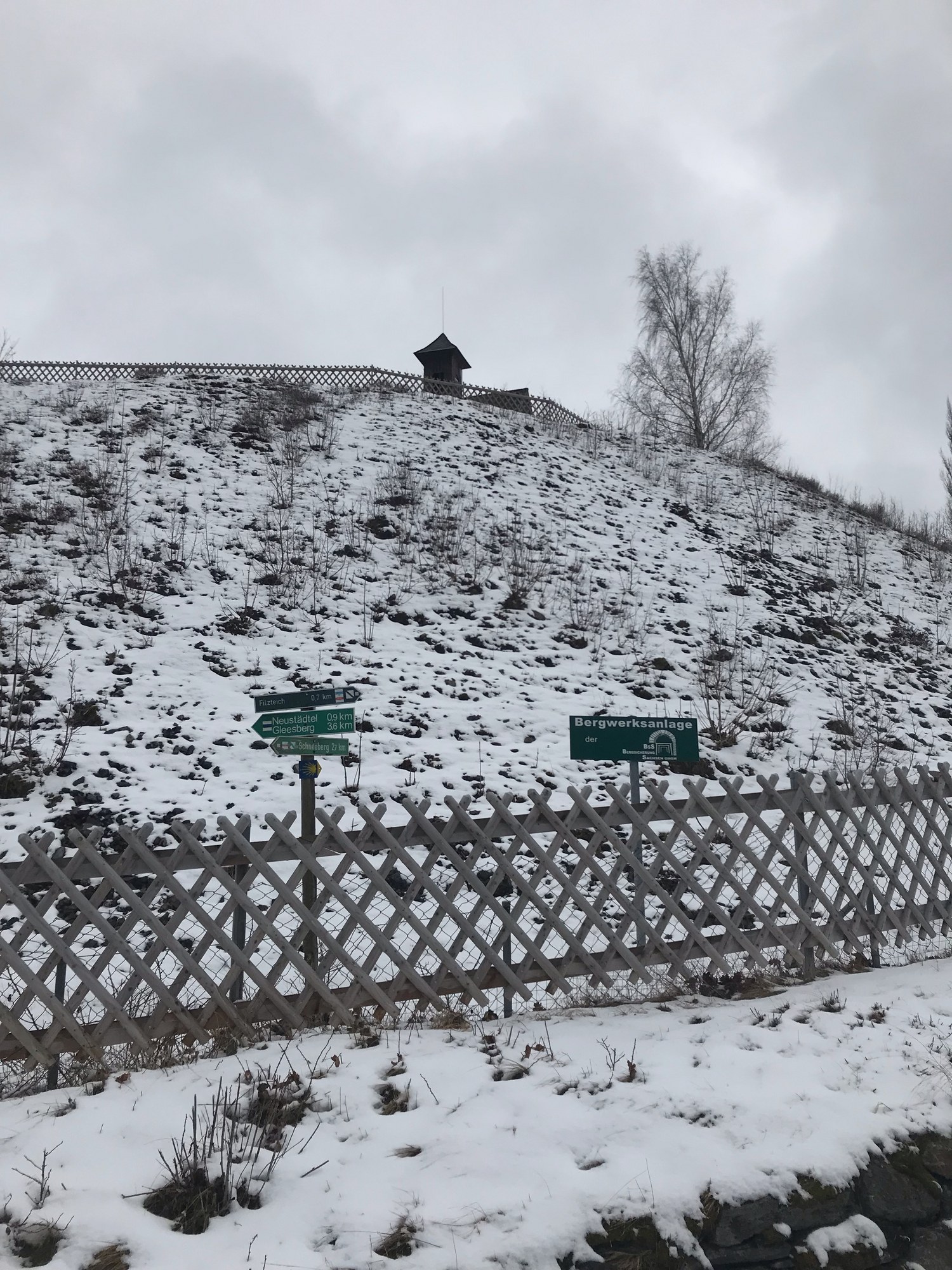 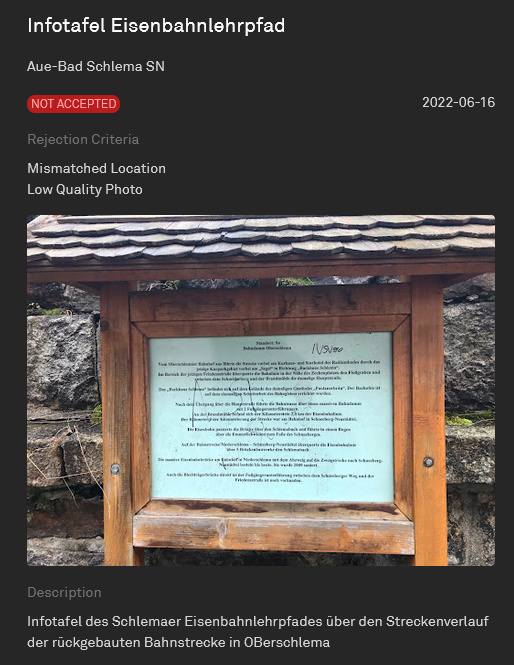 Low quality photo? because of a bit vandalism?

Mismatched Location? ..... it's difficult in taht case, but I explained evrything in the supporting statement. Reading it might be helpful .... 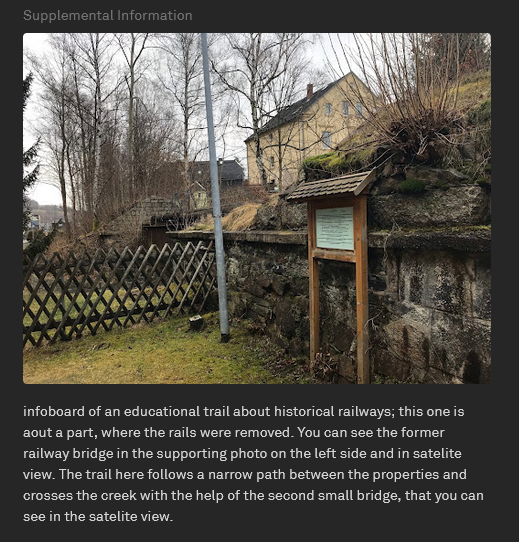 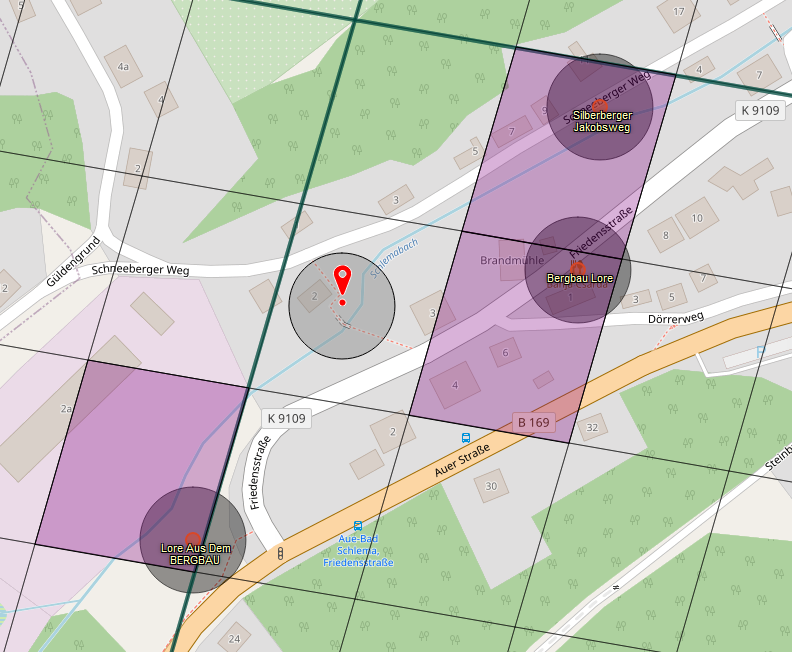