The Birmingham, AL community has been trying (and failing) to get a BLM street mural approved in our city. I have taken charge of submitting the mural, because I can submit pre-taken photos through Ingress. Unfortunately, reviewers are finding every reason under the sun to try to knock this nomination, and it is getting frustrating. There are 2 main reasons why the nomination is getting knocked: the image being taken from a 3rd party and that the mural is seasonal. To try to make this as good of a nomination as possible, a local player took their drone to take the main image for this nomination. There is a lack of publicly-accessible places to get reasonable elevation to get a picture of the entire mural. The mural is surrounded by a park with flat ground on one side, and businesses/apartments on the other side, with no public access to an elevation with a good vantage point. The mural can still be easily seen from the sidewalk, it is just hard to get a good picture of it as a pedestrian. Regardless, a local player who takes a picture via a drone, and does not publish it elsewhere would not count as an image taken from a 3rd party source, right? I even tried to take a picture of the picture to try to artificially lower its quality and make it look more like an amateur photo, and it was still knocked for being 3rd party. There certainly are similar images, but the exact image used was not taken from a website. Attached is the image my friend gave me, as well as the supporting photo that I took at street level: 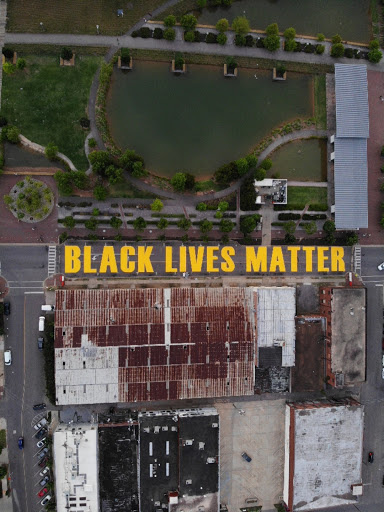 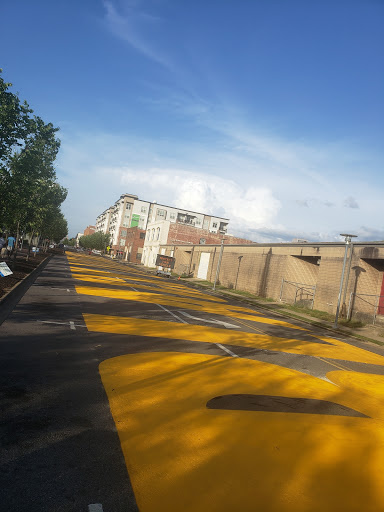 Next is the seasonality of the mural. This mural was painted on June 18th, and it still stands today, almost 3 months later. I have looked through online article after article, and have found no information regarding that the mural will be taken down, let alone a date of when that would happen. So, while I have no direct evidence that the mural is to be permanent, just as well, there is no evidence that the mural will be taken down any time soon. Instead, the mural is even registered on Wikipedia's list of BLM murals: https://en.wikipedia.org/wiki/List_of_Black_Lives_Matter_street_murals#cite_note-5 Notably, many murals on this list have been stated that they are temporary, or have already been removed, but there is no mention of the Birmingham mural being temporary. It really seems like this mural is here to stay, at least for a while. If the mural ever does get removed, then its Waypoint can be removed too, if it ever actually gets approved.

As additional information, the following is the Waypoint description and supporting information used in my most recent attempt:

This mural serves as a beacon to stand behind black lives; that hate and bigotry have no place in our city. The mural was painted on June 18th, 2020 in celebration of Juneteenth. It was painted to bring a brighter future to Birmingham.

This is the third time that we are trying to submit this. This is a permanent mural display with pedestrian access via sidewalk. The main image was taken by a friend via drone, and was not taken via a 3rd party website. Please stand in solidarity with us and push this through, it has a culturally significant message.

I'm afraid that part of why this is being rejected is because of the message of the mural and the audience that I am catering to. I am at the mercy of local southerner reviewers. Niantic's voting algorithm is fairly well hidden, but it does seem like all it takes is a handful of voters to tank a nomination. I have a feeling that if the topic of the mural wasn't BLM, I would be having a significantly easier time getting it approved. There are people who do not stand with the BLM movement, and if they have the power to vote on nominations, their biases may override that they are voting on a street mural.

Additionally, I would love to give my whole argument for why I think this nomination should be approved. I am limited by character limits in the submission GUI. I would appreciate if anyone would be able to assist with being able to at least condense my arguments for why this is not seasonal and the image is not from a 3rd party.