Waypoints in the nature like hiking trail markers are difficult to get approved, although they are fully eligible, especially since they are specifically enumerated under the big point of "A great place for exercise" within the new criteria, and even before the criteria rework there were cleary written guidelines and AMA answers about how to rate them ....

Same for hiking trail bridges. There are clear guidelines. As long as something is significant part of a named trail its fully eligible.

Nethertheless I got a set of three hiking trail bridges now 3 or 4 times rejected. I will submit them again and again, until they are accepted. 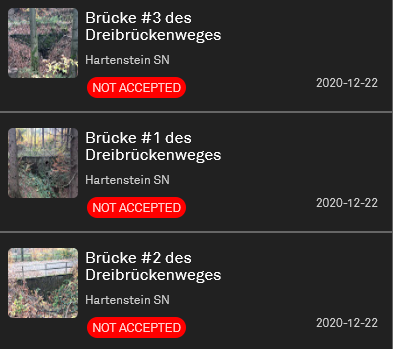 So lets start with an example - one is enough. Only the pictures were different, and the number in the texts. 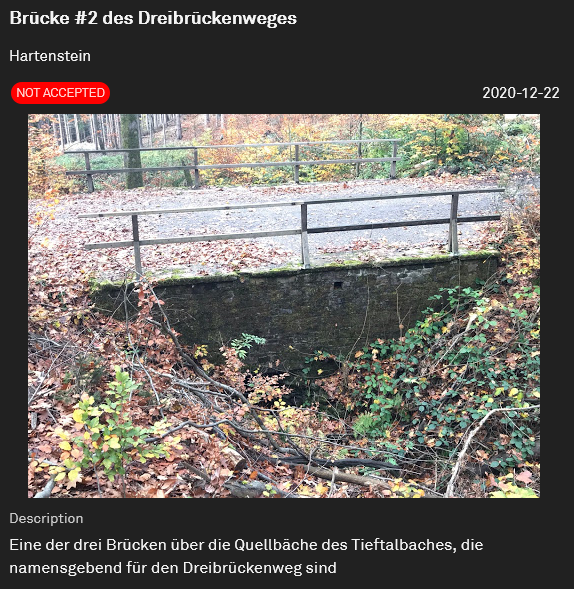 Description: One of the three bridges over the head creeks of the creek Tieftalbach, who are the namesakes for that hiking trail. 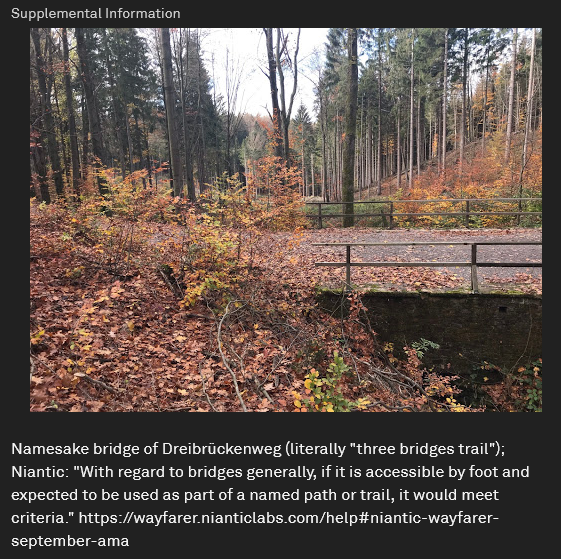 The supplemental information is in english, because Czech Republic is in reviewers range, only 30km away. So English is helpful here. The link stills works: https://wayfarer.nianticlabs.com/help#niantic-wayfarer-september-ama ....

The picture shows a big swath of forest destruction due to a storm in 2018; it can be seen in the satelite view. The adress given to the reviewers even shows the hiking trails name, Dreibrückenweg.The hiking trail can be identified between the trees, and even the creeks can be partially seen. The red exclamation marks are the bridges locations.

So with a little bit of reading my information the locations can be easily verified, only by the given names:

So the hiking trail follows the mountainsides of that valley with the creek. The creek is named in google maps too. Here a view with less zoom, to show you the valley: 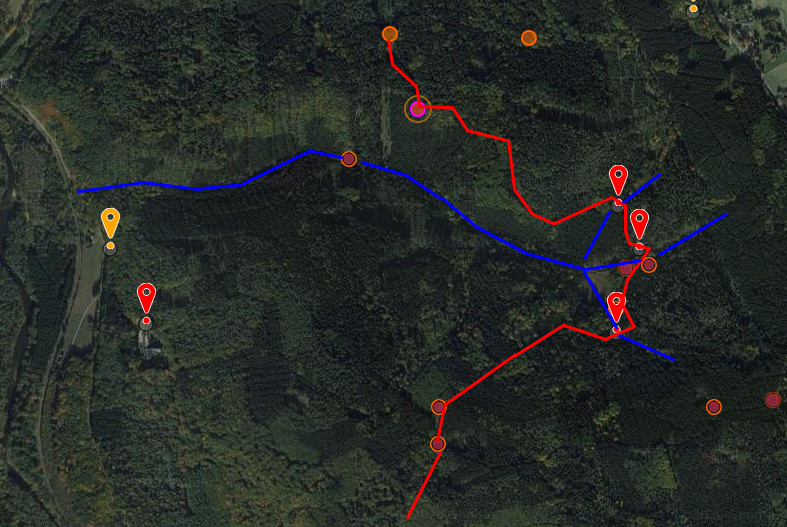 Red marked here evrything, that is named Dreibrückenweg. The waypot at the beginning of the red line is a trail marker, where the biggest sign is the sign for this trail: 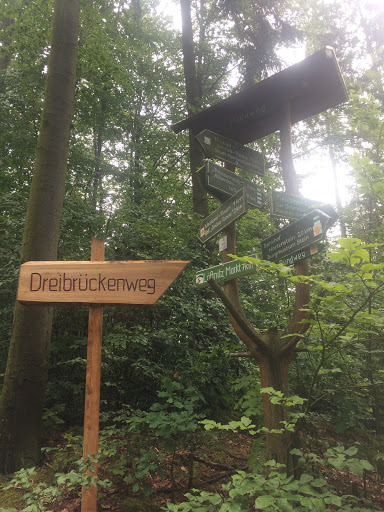 For bridge No 1 and possibly No 2 it could be in the duplicates list.

So the state of Dreibrückenweg: that's the name of this part of a bigger hiking trail network. Looking at the smaller green markers there, you will see lots of small white-yellow, white-green, and white-blue symbols. Those are symbols for different region crossing trails; this style of hiking trail markers is usual in Eastern Germany. So Dreibrückenweg is the name for ~6km through these forest, and its used by lots of other bigger named trails, for example "Historische Salzstraße".

most of the time "not fitting criteria"; only once "mismatched location"; very often "bad/blurry photo", very often "natural feature". So obviously the people don't know the criteria and/or how to use the rejection reasons...

My only statement to those: bad photo ..... I cant really improve the pictures. In the part of the forest, where the bridges are, there are mainly spruce trees. Under high grown spruce trees the ground is acidic - so its brownish during evry season there. So nice bright green surrounding the object, that could convince the reviewer on first glance, is impossible. I made the pictures during autumn, because then there is the least amount of covering leaves and so on given. Autumn like brownish color is there all the year ....

So now the big question:

(also for @NianticCasey-ING and friends)

How to compress all this information into the given amount of characters?

The guideline advice in the supplemental information is totally necessary, sadly. I can't do the whole submission in english, because the German names are needed. So there is not much space left for further information ..... the only way I see is using a collage as supporting picture, but that could cause trouble too, because lots of PoGo-reviewers would see it as abuse, because they dont know, that Ingress has galery access ...

.... or someone presents the secret recipe for Krabby Patties 😋